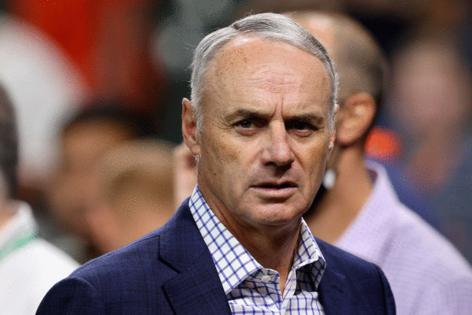 For the foreseeable future, the only official public comments from Major League Baseball seem like they’ll be filtered through Manfred, the commissioner who held a press conference on Thursday morning to officially welcome a lockout.

Speaking from Globe Life Field in Texas, where he said he came to “make a deal” on behalf of the owners, Manfred declared that the lockout was enacted with support of all 30 clubs and that the goal is not to make the same mistake as 1994, a season that was played without a new collective bargaining agreement and ended with the players going on a playoff-canceling strike.

Instead, Manfred’s roughly 15 minutes at the podium on Thursday bordered on peevish and impatient. He came off as a man who couldn’t be bothered to adequately explain the situation that was incredibly predictable and easy to prepare for, while also lending some frightening vagueness that will create more confusion than security.

For example, many people online noticed that before the lockout even had a chance to kick its shoes off and get comfortable, the league’s website removed any stories about active players and even scrubbed their photos from the website completely.

Pressed about this by reporters on Thursday, all Manfred could say was that it was a legal issue. To many, this will be an unsatisfactory answer, especially from someone with such an extensive legal background that is serving as the owners’ spokesman. Despite his pedigree and experience, Manfred all of a sudden could not explain things to the puzzled fan logging on to their favorite team’s website and wondering if their second baseman was wiped from existence altogether.

During the press conference, Manfred debuted what will likely be the company lines during this period of indefinite frustration. Along with “that’s a legal issue”, Manfred leaned on “we have made concessions” at the negotiation table and vigorously called the lockout “bad for the sport.” The final line from that group could be read as a slight dig at the players union, as though Manfred and the owners he works for are blaming them for damaging the sport while absolving their own responsibility in the matter.

It’s clear that Manfred and the owners are very far apart from the players on several issues, but specifically chiding items from the players’ proposal on day one does not portend good things, either from a resolution standpoint or for improving Manfred’s overall public relations, which are currently in a dumpster.

“Things like a shortened reserve period, $100 million reduction in revenue sharing, and salary arbitration for the whole two-year class are bad for the sport, bad for the fans, and bad for competitive balance,” Manfred recited on Thursday, while noting that the players have not budged on any of these issues.

If you polled average baseball fans, most of them would not be able to tell you what a reserve period is or talk about how the arbitration process works. Choosing those as the hot button issues comes off as an example of creating confusion on purpose to distract and deflect from the problems that the common fan would raise a stink about. There will certainly be plenty of time for the owners and players to argue about a universal designated hitter, pace of play, and getting the players paid. But for now, Manfred is relying on the classic lawyer trick of spouting jargon. It’s hard to be mad when you don’t know what you’re mad about, which is why Manfred seems content to not really say anything of substance yet.

“Despite the league’s best efforts to make a deal with the Players Association, we were unable to extend our 26-year long history of labor peace and come to an agreement with the MLBPA before the current CBA expired,” one passage of the letter read. “Therefore, we have been forced to commence a lockout of Major League players.”

Using the word “forced” implies that the owners had no other choice, which is in line with Manfred’s messaging about the lockout being a necessary tool toward reaching agreement. While still coming off as anti-player, that part at least has some sense behind it. The richest part, though, came later in the letter.

“While we have heard repeatedly that free agency is ‘broken’ — in the month of November $1.7 billion was committed to free agents, smashing the prior record by nearly 4x,” Manfred penned, likely echoing what he’s heard from the crybaby billionaires whose collective interest he represents. “By the end of the offseason, Clubs will have committed more money to players than in any offseason in MLB history.”

With those two sentences, Manfred channeled Oklahoma’s Republican Sen. James Inhofe, who once famously brought a snowball to the Senate floor as a foolish argument that global warming is not real.

Manfred trotting his and the owners’ opinions out as evidence that everything is fine is not going to get them any closer to a deal. Until he learns how to express himself in a way that fans can both understand and not actively abhor, Manfred also has a snowball’s chance in hell of coming out of this with an improved image.