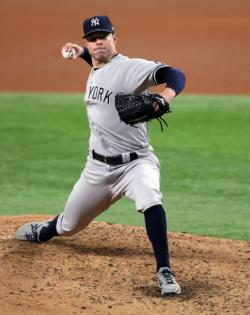 ST. PETERSBURG, Fla. — Manager Kevin Cash and other Rays officials have a pretty good idea what a healthy Corey Kluber can do for them in the clubhouse and, more importantly, on the mound.

And Kluber made clear Wednesday that he signed with the Rays because of what they can do for him — add a World Series championship to his award-filled resume.

“I’m at the stage of my career where I’m trying to still win a World Series,” Kluber said on a Zoom call from Tropicana Field. “And the success that this team has had the last few years, I think it makes it pretty obvious that they’re in a position to do that.”

Kluber is 35 and has missed extended time each of the past three seasons due to injury (broken arm in 2019, shoulder the last two). But both he and the Rays said he finished 2021 with the Yankees healthy and is capable and ready for a full season, albeit likely with some workload monitoring.

His one-year contract incentivizes staying healthy, guaranteeing him $8 million, with the chance to earn up to $5 million more based on starts — $500,000 for his 10th and 15th, $1 million for his 20th, $1.5 million for his 25th and 30th. (Plus, he gets the benefit of living in his Tampa-area home during the season.)

Cash was the bullpen coach with Cleveland in 2013-14 as Kluber (a product of Stetson University in DeLand) ascended to elite status over a five-year period, winning Cy Young Awards in 2014 and 2017, finishing third twice and ninth once.

Among many, Cash cited two reasons for the Rays to be excited about adding Kluber:

One, how dominant he can be on the mound.

“When he’s right, he’s really, really special,” Cash said. “He can command the baseball as well as any guy that I’ve been around on a coaching side.”

Two, how hard he works to be good, comparing him to the gold standard of the late Roy Halladay.