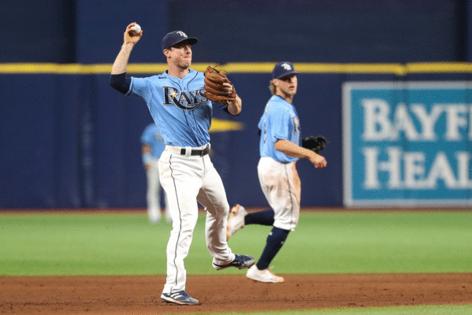 The club acquired Joey Wendle from the Tampa Bay Rays in exchange for outfielder prospect Kameron Misner on Tuesday. Miami designated for assignment outfielder Lewis Brinson to make room for Wendle on the 40-man roster.

Wendle is under team control for another two seasons and is projected to make $4 million in arbitration this year, according to MLB Trade Rumors.

He primarily plays third base but has started at second base and shortstop as well in addition to nine career starts in left field, setting himself up for a super-utility role with the Marlins who have Brian Anderson as their primary third baseman, Miguel Rojas at shortstop and Jazz Chisholm Jr. at second base.

Misner, meanwhile, was the Marlins’ competitive balance pick in the 2019 MLB Draft and was the No 21 overall prospect in Miami’s system, according to MLB Pipeline.

Misner was a revelation at the plate during the final two months of the minor-league season. The lefty hitter had a .326 batting average combined between August and September with 13 doubles, 4 home runs, 27 RBI and 24 runs scored in that span while receiving a promotion from Class A Advanced Beloit (Wisconsin) to Double A Pensacola in the middle of it. That was on top of being an above-average defender.

He showcased his power during the six week Arizona Fall League as well, slugging seven home runs in 102 plate appearances.

This is the second trade the Marlins have made in as many days after acquiring catcher Jacob Stallings from the Pittsburgh Pirates on Monday in exchange for right-handed pitcher Zach Thompson, pitcher prospect Kyle Nicolas and outfielder prospect Connor Scott.