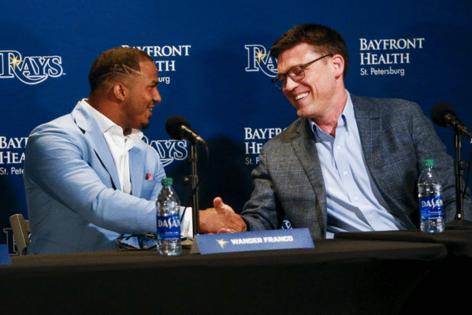 There is a signing bonus, escalator clauses tied to award voting, an if-traded payment and an option with a buyout factoring into where the total value falls between $182 million over 11 years and $223 million over 12.

Franco’s reasons for signing the deal, it turns out, were quite simple.

“With this, I can help my family and have nothing on my mind when I’m playing on the field,” Franco said during a news conference Monday at Tropicana Field, with Jairo De La Rosa, the team’s Latin America cultural coordinator, translating. “And be happy with this opportunity.”

Though Franco is only 20 and could have made plenty going year by year and then cashed in even more (maybe $100 million-plus more) as a free agent, he said staying with the Rays, even with their future home uncertain, was appealing.

“The one thing I want to do is bring a championship to the organization,” Franco said. “The Rays have given me the support that I need, the development, the people that they have here. I wish to stay here for my whole career.”

After the Rays made the initial offer to open the back-and-forth negotiations several weeks ago — and as a report of the talks came out of his native Dominican Republic on Nov. 18 — Franco said he kept the circle small, eschewing the outside noise and talking primarily with his father (also named Wander) and agent Manny Paula.

“I saw this as the opportunity,” Franco said. “I wanted to do this, because this was the organization that opened the door for me to professional baseball.”

Sporting a new Carolina blue suit with a pink pocket square, Franco on Monday looked very much the part of the newly minted mega-millionaire.

He laughed at a question noting his affinity for luxury cars (Lamborghini, Rolls Royce Cullinan SUV, Mercedes with a diamond-embellished steering wheel) and how he might spend his massive new riches.