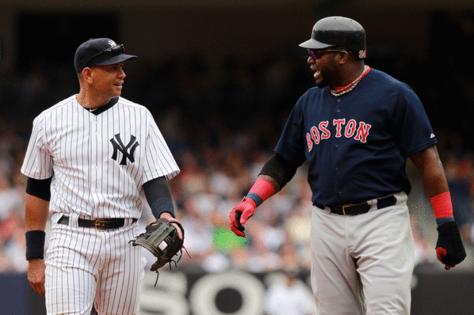 You’ve got steroids cheats going off, steroids cheats coming on, two other steroids cheats somehow hanging on, another leading candidate accused of some horrible sexual harassment charges — and then there is the other elephant in the room in Curt Schilling, who has done everything possible to talk himself out of ever being elected despite a resume as one of the greatest postseason pitchers in history.

This is why it would not be at all surprising if, for the second year in a row, the BBWAA hurls a shutout.

Starting with the two most prominent first-year players on the ballot, Alex Rodriguez and David Ortiz, and keeping in mind the “integrity/character/sportsmanship” voting instructions clause in the ballot, here’s a review of this rogues gallery of Hall of Fame hopefuls:

— A-Rod: After first admitting to using banned substances from 2001-2003 in a 2009 interview with ESPN (having previously flat out denied using steroids in a “60 Minutes” interview with Katie Couric), A-Rod was found to be one of the principals in a 2013 MLB investigation of a south Florida biogenesis clinic for which he received a record 211-game suspension. During that period he launched a scorched earth policy against MLB commissioner Bud Selig, the Yankees, and the Players Association, threatening to sue everyone. But all is apparently forgiven now as Commissioner Rob Manfred, who led the Biogenesis investigation for Selig, later pardoned A-Rod, now ESPN’s lead announcer on Sunday Night Baseball, and welcomed him back into baseball’s good graces. But by his own admission, A-Rod knows the BBWAA will not be so forgiving: “How stupid can you be,” he told Fox’s Joe Buck in October 2017. “The thing cost me $40 million, my reputation and possibly the Hall of Fame.”

— Ortiz: This is a much murkier situation even though Big Papi probably has more “integrity/character/sportsmanship” clause baggage than almost anyone else on the ballot. It starts with him being revealed in a 2009 New York Times report, along with A-Rod, Sammy Sosa and Manny Ramirez, in a group of roughly 100 players who tested positive in a 2003 anonymous drug testing survey conducted by MLB and the players union. At the time, Ortiz did not deny the report, saying only he couldn’t be sure if he’d ever taken an illegal substance — but there is no question, after being signed by the Red Sox in 2003, following his release by the Twins, his career had remarkable power surge midway through that season, which didn’t cease until injuries began taking a toll in 2012. But, again, Manfred has taken pains to soft peddle the drug allegations around Ortiz, telling USA Today in 2016: “Even if your name was on that [anonymous] list, it’s entirely possible that you were not a positive. I don’t think anyone understands very well what that was.” OK. Whatever. But when it comes to the “integrity/character/sportsmanship” clause, it is awfully hard to ignore Big Papi’s long, sordid history of relationships with drug dealers in the Dominican Republic — a fact of life that came to a head in June 2019 when he was the nearly killed in a botched hit job purportedly ordered by drug dealers. In his 2018 book “Baseball Cop,” Eddie Dominguez, a former member of MLB’s Department of Investigations, details Ortiz’s close relationship with a convicted Dominican drug dealer nicknamed “Monga.” According to Dominguez, “Monga” had been a constant companion of Ortiz in 2005 and 2006, with access to the Red Sox clubhouse, and among other things was alleged to have placed large bets on baseball, even on the Red Sox, at a Dominican barbershop in Boston, before being arrested by ICE and deported. Despite all this, baseball has looked the other way on Ortiz’s “integrity/character” issues and he remains a hero to Red Sox owner John Henry and the Fenway faithful.

Meanwhile, as A-Rod and Big Papi arrive on the ballot with all their baggage, Barry Bonds and Roger Clemens, the two most notorious steroid cheats are about to depart it. Both have been stalled out at 60-61% their last few years on the ballot and it’s highly unlikely they’ll get a 15% bump to the necessary 75% needed for election in their last try. For what it’s worth, Ramirez, twice suspended for steroid use, still managed 28.2% last year, while Sosa, who was never suspended, got 17%. Go figure.

And then there is Mr. Schilling, who came the closest to election last year with 71.1% and finished with an 11-2, 2.23 ERA, record in 19 postseason games. He should have been elected long ago, but has repeatedly turned voters off with his extremist political comments on social media, promoting white supremacists on his podcast etc., to the point where baseball writers like myself have said: “I’ll only vote for him now if he’ll promise not to make an induction speech.” After falling 16 votes shy last year, Schilling requested to have his name removed from the ballot, once again ripping the writers, while saying he’d rather take his chances with the former players on the veterans committee “who are in a position to actually judge a player.” We did not take him off the ballot, but I for one will grant his wish to be deferred to the veterans committee.

As if we didn’t have enough stain on this ballot with the druggies and the abhorrent Schilling, there is the case of Omar Vizquel, the best shortstop I ever saw, who appeared to be making great strides toward eventual election, finishing sixth last year with 49.1% — until the report last August that, while he was manager of the White Sox Double-A farm team in Birmingham in 2019, he was alleged to have sexually harassed a former bat boy, who has autism. The previous December, Vizquel was accused of domestic abuse by his wife, Blanca, and I suspect he will experience a significant decline of support this year.

Lastly, a few words on Scott Rolen, who finished fifth in the voting last year and, in contrast to all the others ahead of him, is nothing but a class act and a credit to baseball. I’m just not sure if he’s a Hall of Famer, even if he is acknowledged to be one of the greatest fielding third basemen in history, and this is why: Rolen played 17 seasons in the big leagues but over 150 games in only five of them, 140 in seven. A good comparable for Rolen is Ken Boyer, the great 1950-60s Cardinals third baseman, whose career was likewise compromised by injuries

If you ask me, Rolen and Boyer were essentially the same player, great all-around third basemen — just not Hall of Famers because their careers were limited. However, at least when it comes to the character/integrity/sportsmanship clause, Rolen is a shining light on this ballot. Perhaps if he, too, had played in an era rife with drug cheats and other assorted scoundrels the equally classy Boyer would have gotten more love from the BBWAA.