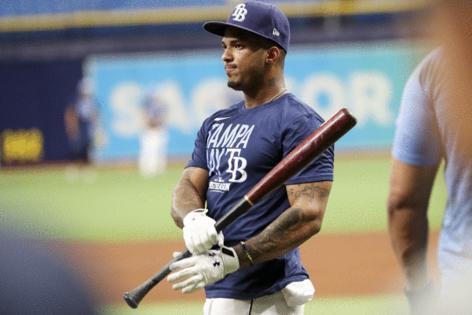 Not when hours earlier Franco and the Rays finalized and announced a record-breaking contract, one that guarantees the multi-talented phenom $182 million over 11 years and potentially $223 million over 12.

“Firstly, thank God for this opportunity and for this blessing,” Franco posted in Spanish. “Thank you to my family for always being there. ... Work hard and firm blessings.”

The Rays were thankful also, getting their best player — and one of top young stars in the majors — signed through 2032, plus a 2033 option, and with cost certainty.

“This is a great day for Wander and for the Rays and is evidence of the mutual trust between Wander and our organization,” Rays principal owner Stuart Sternberg said in a team news release. “So many of our areas had a hand in this — our scouting, development, health and wellness and coaching personnel plus many others.

“We are committed to fielding competitive teams year in and year out, and we all expect that Wander’s presence and contributions will play a large part in maintaining our standard of excellence.”

The deal sets records on several scales as the largest in Rays history, for any major leaguer with less than one year in the majors and for any Tampa Bay-area pro athlete.

Franco’s agent, Manny Paula, and the Rays agreed to the terms Tuesday, and the deal was made official shortly before noon Saturday following the completion of a physical exam and other details.

Both sides were operating under a deadline, as baseball’s labor agreement expires Wednesday, and a lockout and transaction freeze are expected to be implemented, along with uncertainty over what the rules for free agency and player compensation will be in the new agreement.