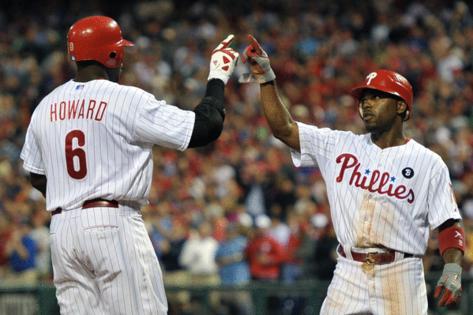 Truth be told, that’s one of the strongest arguments for each of the Big Three from those days. The story of those teams is in many ways the story of its individual stars: a brief but wondrous stretch of all-time production followed by a precipitous decline that left all of us wondering what might have been.

This year, Jimmy Rollins and Ryan Howard will make their first appearances on the Baseball Writers Association of America’s Hall of Fame ballot. Chase Utley will have to wait another three years. For now, let’s take a look at the cases for and against Howard and Rollins, who will need to receive 75% of the votes cast in any one year for inclusion.

— Case For: Fans dig the long ball, and nobody hit more of them than Howard when he was at his peak. For six years, Howard was the most prodigious home run hitter in a sport in which home runs are king. Between 2006 and 2011, he slugged 262 of them, a whopping 18 more than the next closest player (a fella named Albert Pujols). Howard also had 88 more RBIs than Pujols during that stretch.

The case for Howard says that he was such an astronomical power-hitter during his peak that we should ignore the fact that he spent only six-and-half seasons as a marquee player. It says that we should consider the fact that he was rookie of the year at the age of 25, and that he might have had two or three additional top five MVP finishes had he arrived earlier. As it stands now, he finished in the top five four times, winning one, while serving as the centerpiece of a team that was arguably one of the top two teams in the majors for a four-year stretch.

— Case against: Really, it comes down to two names: Mark Teixeira and Paul Konerko. It’d be awfully difficult to formulate a case for Howard that also excludes Teixeira and Konerko. And if all three of those players are in, you’d probably be arguing that nearly a fifth of the first basemen active during Howard’s peak deserve inclusion. Miguel Cabrera, Albert Pujols, and Joey Votto, for starters.

As much as it might sound like blasphemy for those of us who remember how dangerous a hitter Howard was in his prime, Konerko and Teixeira both have similar resumes, World Series titles included.