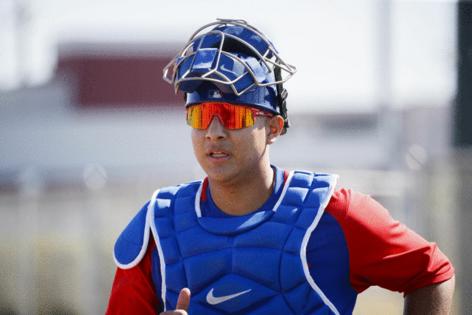 CHICAGO — The Chicago Cubs’ future at catcher has become even murkier.

With All-Star catcher Willson Contreras due to become a free agent after the 2022 season, Miguel Amaya represented the best young, internal option at the position should the organization go in a different direction. Presumably, if the Cubs do not sign Contreras, 29, to a long-term contract in the offseason, they likely will explore trading him sometime before the July deadline, following the same blueprint from last season when they dealt star players on expiring contracts.

The 22-year-old Amaya — ranked the No. 4 prospect in the organization, per MLB.com — came into 2021 needing to gain experience behind the plate and at the plate at Double-A, with his performance potentially putting a promotion to Triple-A in play after losing an important developmental season when the pandemic eliminated games in 2020. Instead, Amaya played in only 23 games and logged 106 plate appearances, last playing June 3 because of a right forearm strain.

The injury caused Amaya to miss the rest of the season, and he now could miss all of 2022 after reportedly needing Tommy John surgery to repair the ulnar collateral ligament in his right elbow. MLB.com reported Amaya’s surgery is imminent. As of two weeks ago, Amaya was being re-evaluated.

Amaya’s reported impending surgery is a big blow to the Cubs in the short and long term. Contreras and Amaya are the only catchers on the Cubs’ 40-man roster, and the only other young catcher in the system who ranks among the organization’s top 30 prospects, via MLB.com, is Pablo Aliendo, 20, who reached High A this year. The Cubs’ 2019 sixth-round pick, catcher Ethan Hearn, spent the season at Low-A Myrtle Beach, and 2021 eighth-round selection Casey Opitz made his professional debut.

Tommy John surgery is most associated with pitchers, but position players and catchers sometimes require the surgery too. The list of notable catchers to return from the procedure include Salvador Perez, Travis d’Arnaud and Matt Wieters, all of whom missed a year’s worth of games following the rehab process. A 12-month recovery is the typical timeline for catchers, who aside from pitchers throw the ball the most during a game and must be able to handle a variety of throws and arm angles.

While the Cubs are saying the right things in regard to fielding a competitive team in 2022 — which, given their financial flexibility and resources and a seemingly winnable division, they should — the organization instead might be better positioned as a postseason threat in two or three years. That makes Amaya’s surgery and subsequent missed time especially unfortunate.

The Cubs must make a decision in the coming months on Contreras’ fit going forward without having a good idea of whether Amaya can be a viable big league catcher. If anything, it creates more urgency to get a contract extension done with Contreras.