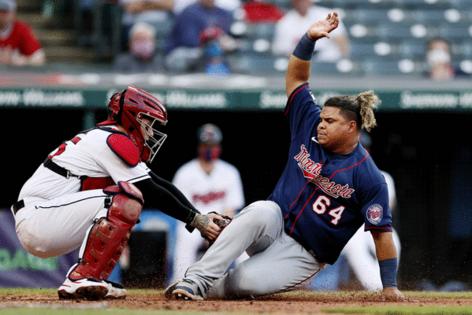 MINNEAPOLIS — He was the Twins' one-man protest to the current marathon version of big league baseball, which years ago succeeded in turning away casual followers, and is now working overtime to do the same with us hardcores.

In this game of three true outcomes, strikeout, walk or home run, he offered one true outcome: If a pitch was within reach, even marginally, he was going to do his all to put it in play.

In the midst of the surge of this worldwide enemy, the COVID-19 catastrophe of 2020, when the big league schedule was reduced to 60 games and there was no minor league play, he headed back home to Venezuela and played the full 40-game winter schedule, plus playoffs, plus the Caribbean World Series, for league champion Caribes.

Willians Astudillo is a Spanish speaker from Barcelona, Venezuela, but with his "Fun is Good" attitude toward baseball he could be a great nephew to Bill Veeck Jr. from Chicago.

Astudillo brought hundreds of smiles in fewer than 100 games for the Twins from 2018 through 2020, and then even he could do little to change the dreary vibe that surrounded the 2021 Twins — perceived contenders to 73-89.

We became so grumpy that even Astudillo, the beloved La Tortuga (The Turtle), was having his presence on the roster questioned. Previously, it had been hilarious that in many of the Turtle's professional seasons (starting in 2009), he reached base more frequently on hit by pitches than walks.

That was the case again in 216 plate appearances for the 2021 Twins, four HBPs and three walks, but when the batting average fell to .236 … well, that .259 on-base percentage made what happened Friday inevitable:

Astudillo, 30 last month, was dropped from the 40-player roster to make room for prospects.

Once he clears waivers Monday, the Twins could offer a minor league contract. In truth, they no longer see him as a third catcher, which means little chance for him to make it back to big leagues here.

Thus, he's likely gone, but long to be remembered. What he did, this man in which the joy of swinging a bat overwhelmed any good intentions for patience, was go from myth to mythical in his short time in Minnesota.