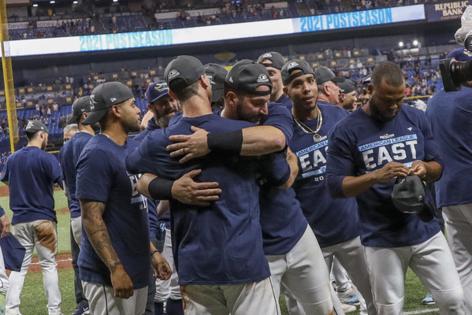 ST. PETERSBURG, Fla. — So the Rays won two of the four major awards handed out in the American League, which is obviously an impressive and celebratory haul.

But it’s the two awards they failed to win that really tell the story of the 2021 Rays.

For the second year in a row, the Rays had the best record in the AL and failed to get a single vote for the Cy Young Award. Not a third-place vote, not a fourth and not a fifth. Eighteen pitchers have been on Cy Young ballots in the past two years, and nary a one from Tampa Bay.

And for the second year in a row, Brandon Lowe was their highest finisher in the MVP race. He was eighth in 2020 and 10th last week. Three different Rays got 10th-place mentions, almost as if voters got to the end of the ballot and felt obligated to include somebody from the AL’s only 100-win team.

The craziest part of all this? The voters were not wrong. There should be no howls of slights or injustices.

This was a team that defied the narcissism of the social media age. They were talented, yes. They were deep, for sure. But they also were willing to share playing time and glory like few others, it seems.

Some of that is the circumstances of the players on the team. The Rays often find players who were overlooked for one reason or another with a different organization and are just happy to be put in a position to succeed in Tampa Bay.

But a lot of it is also the culture created by manager Kevin Cash, which goes a long way toward explaining why he is the first in history to win back-to-back AL Manager of the Year awards.