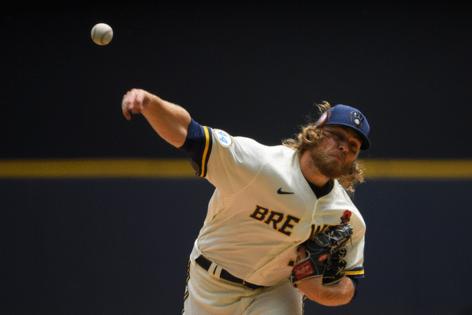 LOS ANGELES — Max Scherzer might have been the best pitcher in Major League Baseball after the Dodgers acquired him at the July 30 trade deadline, but 30 media members collectively determined he wasn't the best pitcher in the National League for the entire 2021 campaign.

Scherzer tallied 113 points. He didn't make the top three on six ballots. The 37-year-old free agent has finished in the top five in Cy Young Award voting eight times in his career.

Dodgers right-hander Walker Buehler finished fourth despite leading the majors in quality starts, posting the second-best earned-run average in the NL and logging the second-most innings across the majors. Teammate Julio Urías, the only 20-game winner in the majors this season, finished tied for seventh with St. Louis Cardinals right-hander Adam Wainwright.

Different cases could've been made for each of the three National League finalists, who were named on all five-man ballots.

Scherzer compiled a 2.76 ERA in 19 starts for the Washington Nationals before finding another gear in Los Angeles. He recorded a 1.98 ERA during the regular season with the Dodgers, tallying 89 strikeouts to eight walks over 68 1/3 innings. The Dodgers went 11-0 in his starts.

Wheeler trounced his fellow finalists' workloads, leading the majors in innings pitched (213 1/3). To complement the dependability, he ranked first in the NL in strikeouts (247), fifth in ERA (2.78), seventh in strikeout rate (29.1%), second in Fielding Independent Pitching (2.59), first in Baseball Reference WAR, and second in FanGraphs WAR.

But Burnes recorded just 11 wins and 167 innings, ranking 19th in the NL. A starter, outside of the pandemic-shortened 2020 season, had never won the Cy Young Award with that few innings pitched. Burnes became the first in a close race.