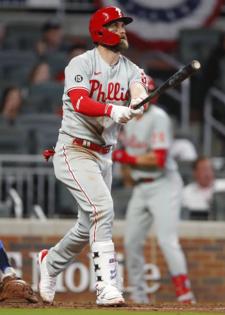 PHILADELPHIA — Bryce Harper arrived a few months ago at his 5,000th major league plate appearance with statistics that were strikingly similar to Barry Bonds’ at that milepost. Because most observers considered Bonds a future Hall of Famer before he was linked to steroids, it raises a fascinating question:

Ten seasons into Harper’s career, with 10 years left on his $330 million contract, is he on course for Cooperstown?

“For me, Barry Bonds is one of the greatest hitters of all time, if not the best. I just try to be Bryce,” the Phillies superstar said during the past season. “That’s what my dad’s always told me: ‘Don’t try to match anybody else or be like this guy or that guy. Just be Bryce.’ I think there’s certain things in my career that could put me on a trajectory to be [in the Hall of Fame] one day. But there are also those days where I’m not.”

Unlike Mike Trout, who could retire today and gain entry to the Hall of Fame as this generation’s greatest player, Harper, who turned 29 last month, is not yet a sure bet. But he is trending well largely because of his power and plate discipline, the skills that will most define his chances of getting there.

Membership in the 500-homer club is no longer a free pass to Cooperstown after the steroids era, but it remains a golden milestone. It also may be within Harper’s reach. With 267 homers in his pocket, he needs to average 24 homers per year over the next 10 years to get to 500. He has averaged nearly 33 homers per year in the last six full seasons.

Harper’s projected .386 career on-base percentage would neither put him in the top-100 all time nor be as undeniable to Hall voters as his power numbers. But it would be central to his case. Since his major league debut in 2012, Harper ranks fifth in OBP (.392) mostly because he’s tied for the fifth-highest walk rate (15.2%). He also has drawn more walks than any player since 2016. ZiPS, a projection system developed by FanGraphs’ Dan Szymborski, gives him 1,692 walks through 2031, which would rank him 10th all-time. Of the top nine, only Bonds isn’t in the Hall of Fame. One downside to all the walks: They draw away from other statistical totals, such as hits and RBIs.

This combination of power and plate discipline form the foundation for Harper’s solid OPS+, which stands at 142 — or 42% above league average — tied for ninth among all players since 2012. ZiPS projects him to post about 131 through 2031. To Jay Jaffe, author of The Cooperstown Casebook, OPS+ is among the more promising data points for Harper’s Hall of Fame case.

“Being 40 percent above the league is really where you’re talking about a guy who’s probably a Hall of Famer, if he maintains that over 8,000 to 10,000 plate appearances,” Jaffe said. “The expectation is that Harper is going to regress from that. But anything in that range is going to get some attention.”

WAR tells a similar tale. Partially because Harper doesn’t tend to grade well in defensive metrics, he had less WAR through 5,000 plate appearances (36.5) than many of the 15 most similar players. But ZiPS gives him six more seasons of at least 3.0 WAR and puts him at 72.6 through 2031. The average WAR for Hall of Fame right fielders is about 68.