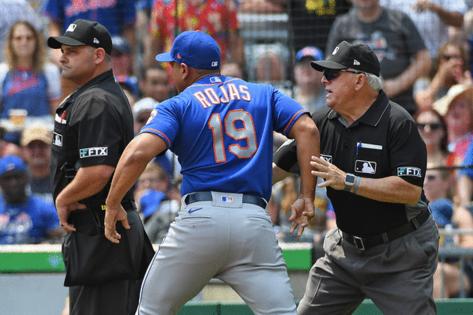 Luis Rojas didn’t have to look very far to find his next job.

Less than two months after being ousted as the Mets manager, Rojas was named the Yankees’ third base coach. The team announced the hiring on Monday, filling the spot vacated when Phil Nevin was fired.

Rojas will move his office from Queens to the Bronx after 16 years with the Mets’ organization. During that time, he managed in Single-A, Double-A and the Gulf Coast League. In his two seasons as skipper of the Mets big-league club, his team went 103-119, missing the playoffs both years.

Nevin was fired in October, along with hitting coaches Marcus Thames and P.J. Pilittere, in a slew of moves that came on the heels of the Yankees’ loss in the American League Wild Card Game.

During that game, Nevin inserted himself into the narrative in a way that no third base coach ever wants to. With the Yankees trailing 5-1 and trying to mount a comeback in the sixth inning, Nevin waved Aaron Judge home in an ill-advised move. Judge ended up getting thrown out at the plate and the Yankees were unable to ever get within three runs in the eventual 6-2 loss.

Rojas never played in the big leagues in his career, but spent time as a minor leaguer with the Orioles, Marlins and Expos/Nationals. His addition to the Yankees’ dugout gives the staff its second coach with MLB managerial experience along with Aaron Boone. Like Boone, Rojas is also a member of a deep baseball lineage.

His father, Felipe Alou, played in the big leagues for 17 seasons and later managed for 14 more. Rojas’ half-brother, Moises Alou, was a six-time All-Star outfielder in the 1990s and 2000s.

The Mets declined Rojas’ option after their disappointing 2021 season. In addition to interviewing for the Yankees’ third base coach position, Rojas also interviewed for the Padres’ open managerial gig before it went to Bob Melvin.

Both Rojas and Boone will speak with members of the media in a virtual press conference on Tuesday afternoon.