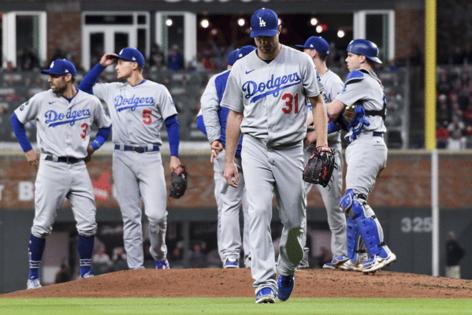 LOS ANGELES — The clock had just struck midnight on Saturday and the Dodgers' season, and rage didn't fill Mookie Betts. The Atlanta Braves toppled the Dodgers in Game 6 of the National League Championship Series to cease the club's pursuit of back-to-back World Series titles but Betts was not angry. The superstar outfielder was not crushed. At least he didn't portray himself that way.

"I am not disappointed at all. It is what it is," Betts said in the hallway outside the visiting clubhouse at Truist Park. "You win some, you lose some. We didn't score more runs than they did. They played well."

Betts' sentiment was echoed by manager Dave Roberts and other players who spoke to the media after the 4-2 loss. A few veterans addressed the clubhouse before they packed up and exited the ballpark. But if there was an outpouring of emotion, it was hidden from the public eye.

"I don't think losing in the NLCS is as big a letdown as everyone is going to make it out to be," starting pitcher Walker Buehler said. "We won 106 games. We won a couple of playoff series. This was a special team in a lot of ways, and it just so happened that we are not going to win the World Series this year. That's part of this game."

The collective reaction to the season ending without a National League pennant depicted the recognition of a truth they declined to directly admit in front of cameras and voice recorders. The Dodgers were drained. They were battered. They were incomplete.

"We kept grinding," closer Kenley Jansen said. "Everything we asked everyone to do, everyone did their job. And we came up short. It was a great group of guys we had here. And it was a great ride."

That isn't to suggest the Braves didn't encounter roadblocks. All-Star pitcher Mike Soroka's year ended before it began. They lost perennial MVP candidate Ronald Acuña Jr. for the season in July. They lost Marcell Ozuna for the season when he was arrested for domestic violence in May. Jorge Soler, one of four outfielders acquired as part of Atlanta's outfield reconstruction, missed most of the NLCS after testing positive for COVID-19. Every team deals with unlucky breaks.

The Dodgers have more money than most franchises to patch holes on the fly. And they tried. But an uncharacteristic lack of organizational depth combined with bad injury timing, a relentless schedule, and faulty pitching plans left them limping to the finish line in their attempt to become the first club to win consecutive championships since the New York Yankees claimed three straight from 1998 to 2000.

"It's just tough," Betts said. "It's tough to win just in general, but going back-to-back, it's exponentially harder, especially with the injuries and everything that teams go through. There's a reason why it's been so long since it's been a back-to-back [champion]. It's just really hard to do."

The Dodgers had two major needs at the trade deadline: starting pitching and bench depth. Both are traditionally strengths for rosters Andrew Friedman constructs. This year, even with a $260 million payroll, was different.