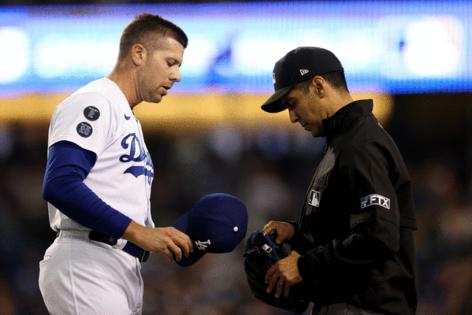 NEW YORK — For a game in serious trouble in terms of losing its appeal with its longstanding loyal fan base, baseball is doing itself no favors in this postseason rife with interminable games, relentless pitching changes and embarrassingly awful umpiring calls.

If there’s one thing that’s stood out the most in a game run amok with analytics, it’s the notable absence of innings-eating starting pitcher “horses” in the mode of Madison Bumgarner, Justin Verlander, Jon Lester, Jacob deGrom or Corey Kluber this postseason. So far there have been only four instances in which a starting pitcher has pitched seven or more innings, two of them by the Giants’ Logan Webb in the NL Division Series. A lot of this, of course, can be attributed to the dramatically increased starters’ workloads this year after last year’s pandemic-reduced season, and the concerns of them breaking down (like Astros ace Lance McCullers) with yet another tier of postseason potentially to come.

But in reality, we’ve seen this “Bullpen Baseball” coming. According to the Elias Bureau, the average number of pitchers per game has gradually increased from 5.5 in 1988 to 6.9 in ‘98, 7.8 in ‘08, 8.6 in ‘18 and 8.8 this season. As of Friday, teams in the postseason had used five or more pitchers in a game 41 times, while the so-called “opener” has begun to become the norm, in many cases to the manager’s detriment.

You could make the case that Dodgers President of Baseball Operations Andrew Friedman and his analytics disciples “managed” the Dodgers out of the first two NLCS games in Atlanta after ordering manager Dave Roberts to pass up starting Julio Urias (who’d been 20-3 during the regular season) in Game 5 of the NLDS against the Giants in favor of an “opener” format with relievers Corey Knebel and Brusdar Graterol. The fact that Urias was only able to give Roberts four innings created a situation in which the Dodger manager elected to bring in his ace, Max Scherzer, to close out the 2-1 win. That resulted in Scherzer being unavailable to start Game 1 of the NLCS against the Braves as Roberts went to another bullpen game, which the Dodgers lost. Furthermore, as Scherzer confirmed, the relief appearance against the Giants created a deadness in his arm that held him to just 4 1/3 innings of Game 2 Sunday and also prevented him from being able to start the pivotal Game 6 Saturday night.

But then, with the Braves on the verge of putting a stake in the Dodgers’ hearts Tuesday, holding a 5-2 lead after seven innings, their old-school manager Brian Snitker inexplicably decided himself to go on the constant search for the one guy who didn’t have it. He found him in Luke Jackson, his fourth pitcher of the game, who gave up the back-breaking three-run homer to Cody Bellinger. The inning prior, Tyler Matsek, the third Braves pitcher, had retired the side on no hits and two strikeouts, and you have to ask yourself:

When are these managers going to trust their eyes and their guts and stick with these pitchers who are getting nothing but outs?

Even Alex Cora, the Red Sox’s much-acclaimed manager, went bullpen-crazy in Game 4 of the ALCS, yanking his starter Nick Pivetta after five innings of two-hit ball and bringing in a parade of three relievers to preserve the 2-1 Boston lead before summoning his ace starter Nathan Eovaldi after the Astros tied the score in the eighth off Garrett Whitlock. Eovaldi was rocked for four runs and lost the game.

It is worth noting that those two LCS games last Tuesday lasted 4:14 and 4:04 respectively. So far, there have been six games of over four hours this postseason. In the words of former Dodger GM Ned Colletti: “Last Tuesday, you could have driven from Florida to Washington D.C and needed only two games.” Despite all of MLB speed-up efforts, the average time of nine-inning games this season was another all-time high at three hours, 10 minutes, seven seconds.

The multiple pitching changes is the biggest factor, but so, too, are the estimated 12 seconds of time wasted with the batters stepping out of the box after every pitch, and the increasing number of foul balls. According to Baseball Reference, 2017 was the first time in the regular season there were more foul balls than balls in play and that continues to increase. So far this postseason, for the first time in history foul balls have accounted for over 30% of strikes.

The foul balls can’t be regulated, and as long as clubs are going to slap pitch counts on pitchers the day they sign their first pro contract and ingrain in them not to worry about having to face the batting order a third time around, Bullpen Baseball is going to be the norm. One experimental remedy I found interesting was in the independent Atlantic League this year, which is a DH league. A rule was implemented that once a team’s starting pitcher was removed from the game, they lost the DH.

Meanwhile, through all this postseason drudgery, we’ve seen some of the worst umpire decisions ever. It was inexcusable that the Dodgers-Giants NL Division Series ended with the Giants’ Wilmer Flores being called out on a checked swing that absolutely wasn’t by first base umpire Gabe Morales.

“That’s going to be the thing that’s talked about for quite a while and I understand why,” said Giants manager Gabe Kapler. And then there was the atrocious night Laz Diaz had behind the plate in Game Four of the ALCS in which he missed 23 ball-strike calls. Diaz has long been one of the lowest-rated umpires in the majors, so you have ask: Who made this decision? And why, assigning Diaz to a postseason series where he could embarrass baseball on national TV? But for some reason (see also: Angel Hernandez) consistently low rated umpires are never demoted, never fired and never held accountable. They just go on.