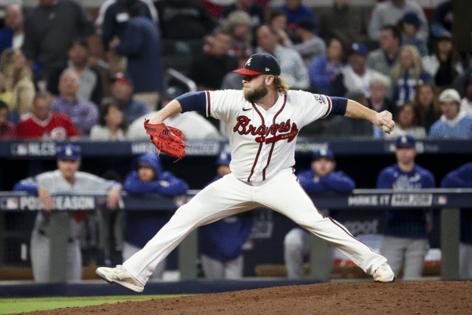 ATLANTA — It was close to midnight Saturday when Atlanta erupted. A sellout crowd erupted. Fireworks erupted. The players erupted, tossing off their caps and hopping madly around the infield. The mascot charged onto the field, waving an enormous red flag with the words “NATIONAL LEAGUE CHAMPS.”

But, as the Dodgers left the field for the last time this season, I was not thinking of the Braves. I was thinking of the New York Yankees. I could not help but think of what Aaron Boone, the manager of the Yankees, said after his team was eliminated in the playoffs this year.

“The league has closed the gap on us,” Boone said.

The Yankees did not fire Boone for saying that. They just signed him for another three years.

It is where the Yankees are, in a sport where financial might alone no longer guarantees success. It might be where the Dodgers are, at the end of the most glorious run in the history of a proud franchise.

After seven years of winning division championships and rebuilding an organization, the Dodgers and their owners went all in for the 2020 and 2021 seasons, committing half a billion dollars to Mookie Betts last year and Trevor Bauer this year, combined.

They did not even get to the World Series this year — and, no, it was not Bauer’s fault. The Dodgers replaced him with someone even better: Max Scherzer.

And they got pretty close: within two games of a repeat appearance in the World Series, even as they lost Max Muncy to injury on the last day of the regular season, too late to acquire a replacement, and they lost a player a day to injury in the NLCS on three consecutive days: Justin Turner, Joe Kelly and Scherzer.

Now the bills come due.

More than 45 years after his final at-bat, Tony Oliva's stellar but truncated baseball career finally received the imprimatur that he and a legion of Twins fans had long craved: Hall of Fame.

Former Dodgers slugger Gil Hodges, who won championships as a player in Brooklyn (1955) and Los Angeles (1959) and managed the New York Mets to the 1969 World Series title, was one of four players elected to the National ...Read More

John Jordan “Buck” O’Neil, the Kansas City Monarchs star player and manager who was passed over for the National Baseball Hall of Fame shortly before his death in 2006, was elected to the hall on Sunday.

NEW YORK — You may have heard:

The business of baseball is closed down indefinitely, with the owners’ lockout of the players in the wake of the stalled negotiations over a new labor agreement. It’s another self-...Read More