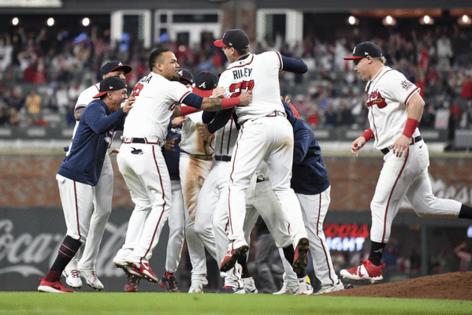 ATLANTA — This was the management equivalent of Bill Buckner’s blunder at first base, of Willie Davis’ three errors in center field, or Steve Bartman’s gaffe down the left-field line.

Actually, this was worse.

Buckner’s, Davis’ and Bartman’s teams had a chance to recover from their respective mistakes. Now that the National League Championship Series is over, it’s evident the Dodgers were finished once Andrew Friedman and the geniuses in the front office decided the postseason was the right time to experiment.

The $260-million Dodgers were officially eliminated on Saturday night in a 4-2 defeat to the Atlanta Braves, who won the best-of-seven matchup by an identical margin and earned the right to get destroyed by the Houston Astros in the World Series.

Starter Walker Buehler was pitching on three-days’ rest and looked like it, giving up four runs, seven hits and three walks in four innings.

Buehler pitched because Max Scherzer couldn’t — the remnants of a decision made in the previous round.

Hall of Fame pitcher and TBS broadcaster Pedro Martinez, who knows a thing or two about mistakes made by the Dodgers, posted on his Twitter account, “@Dodgers analytics dept really messed up probably the best rotation in all of baseball. That’s why we’re not seeing the sharp breaking balls and the giddy up fastballs. They need to figure out a way to let starters be who they really are and let them pitch how they are used to.”

In other words, the Dodgers shouldn’t have done what they did against the San Francisco Giants in Game 5 of their NL Division Series.

Readers’ letters printed in the Sunday edition of this newspaper reflected the mistaken view this was manager Dave Roberts’ idea. To be clear: The plan to have Urias follow openers Corey Knebel and Brusdar Graterol in Game 5 of the NLDS, which ultimately led to Roberts calling on Scherzer to pitch the ninth inning, was hatched by the front office.