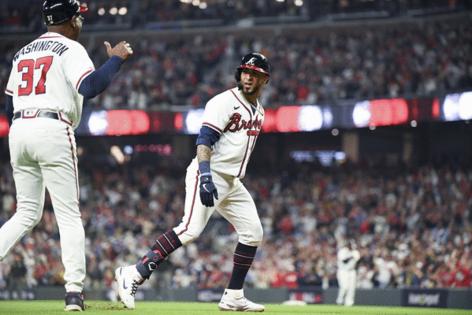 ATLANTA — Eddie Rosario got a curtain call at Truist Park Saturday night. It could have been any number of Braves players. Manager Brian Snitker and general manager Alex Anthopoulos can take a bow, too. Don’t forget the scouts, past and present, who identified the prospects who became good major leaguers.

Rosario starred for the Braves in the National League Championship Series. But beating the Dodgers was an organization-wide effort. The Braves clinched the pennant with a 4-2 victory. A year after blowing a 3-1 lead to the Dodgers in the NLCS, the Braves gained the same advantage and finally finished them off.

The 2021 Braves are different. They started the season as one of many teams chasing the Dodgers. It took some doing just to win the NL East. Thee recent postseason ledger for the Braves included eliminations in three straight years, including the 2020 NLCS vs. the Dodgers. The Braves were heavy underdogs for the rematch.

Braves All-Star Freddie Freeman has a chance to make the Hall of Fame one day. The rest of the roster includes some good veteran players not on his level, or talented youngsters who still have to prove their staying power. That’s the group that took down the mighty Dodgers.

Rosario’s three-run homer in the fourth inning that put the Braves ahead for good. The Braves won the best-of-seven series in six games. The Dodgers, last year’s World Series champion, won’t be repeating.

Freeman deserves this. He’s the Braves player who spans eras. Freeman broke into the majors as Chipper Jones was on his way out. He soon became one of MLB’s best hitters, but the Braves were losing. Freeman was still with them when the winning started again and, last season, was voted NL MVP.

Now Freeman is going to the World Series. He’s in the final year of his contact. His price keeps going up. The Braves must pay it. They can’t let their long-time star walk away from a contending team with a young core. The Braves need Freeman to win more pennants.

The Braves built a good team around Freeman. It looks a lot different than before the trade deadline. Anthopoulos saved the season by acquiring four outfielders to fill the lineup holes left by Ronald Acuna and Marcell Ozuna. Skeptics wondered whether the Braves had done enough to build a contender. Anthopoulos said the team just needed to get to the postseason, where anything can happen.

The Braves got there and what happened is they are going to the World Series.