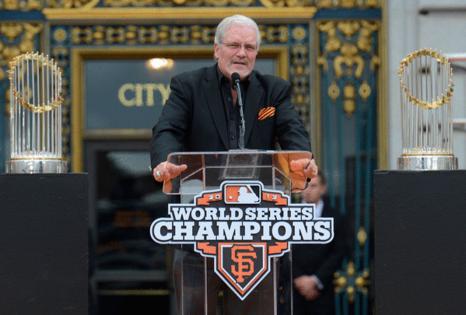 The 65-year-old is currently acting as a special assistant for the Giants after being their winning GM for 18 seasons from 1997 to 2014. Under his leadership, the Giants won three World Series titles and had a winning record in 13 of the 18 seasons he spent as San Francisco’s GM. Before he landed on the West Coast, Sabean began his professional career as a scout for the Yankees. He was an architect of the Yankees farm system that ultimately produced champions in Derek Jeter, Bernie Williams, Andy Petitte, Jorge Posada and Mariano Rivera.

Not only would Sabean be a home-run hire for the Mets, but he’s apparently willing and excited to be considered for the club’s open position for president of baseball ops.

A source close to Sabean confirmed to the Daily News that he very much would like another challenge in his life. He’s going stir crazy in San Francisco with essentially nothing to do (in the role of a special assistant) with the Giants. But the real attraction for Sabean would be the fact that it’s New York and it’s the Mets, the source said. Unlike Billy Beane, who was reluctant to uplift his family and roots from the West Coast to New York City, the source close to Sabean said he would do it in a heartbeat if the Mets offered him the job.

It is unclear if Mets owner Steve Cohen and team president Sandy Alderson have contacted Sabean. But, on a flashy lineup of executives that included Theo Epstein (Red Sox and Cubs), David Stearns (Brewers), and Beane (A’s) and none of them working out, Sabean is an equally appealing name that should be at the top of the Mets list for head of operations.

“Sabean is the perfect guy,” a senior MLB executive told the News. “There’s this perception that no one wants to work for Cohen. But if Sandy brings Sabean to Cohen, the Mets would be hiring a Hall of Famer.”

If Cohen hired Sabean, the Mets would also be likely to get another Hall of Famer in Bruce Bochy. The 66-year-old former manager led the Giants to three World Series titles across 12 seasons at the helm from 2007-2019. Prior to his run with the Giants, he managed the Padres and led them to one World Series appearance. Bochy also played for the Mets as a catcher in 1982.

Bochy, who retired after the 2019 season, is also looking for one more challenge and is said to be under consideration by the Padres to succeed Jayce Tinger as their manager. The likelihood of Bochy coming to the Mets dugout would increase if Sabean was offered the chief job. Alderson has stated that an experienced head of operations would have the autonomy to pick his own manager and coaching staff.

There is some concern among those familiar with Cohen’s thinking that he would prefer to hire a young executive to take over the Mets front office. One higher-up MLB executive believes that a greenhorn is the opposite of what the Mets need.

“This Mets job is a yeoman’s task, and it is a task in which it needs an adult in the room,” the exec said. “There’s a lot to be done.”

When Sabean set out to handle GM duties in 1997 for the Giants, he took over a club that was in deep disorder. In 1996, under former GM Bob Quinn, San Francisco finished last place in the NL West with a 68-94 record. Sabean needed just one season to flip the script. He shook up the roster with a controversial trade at the time, made some necessary acquisitions and the Giants wrapped up 1997 with their first NL West title in nearly a decade. It was the first of eight winning seasons as the Giants averaged 92 wins per year in that stretch, including capturing the NL pennant in 2002.

In 2010 under Sabean’s leadership, San Francisco finally won its first championship in 56 years. They won the World Series title again in 2012, and again in 2014. The following year, Sabean was promoted to executive VP of baseball ops for the Giants. His 18 years as their GM was the longest in club history.

Sabean’s resume speaks for itself. He is one of the greatest executives in the history of baseball, and the Mets need to give him a call.