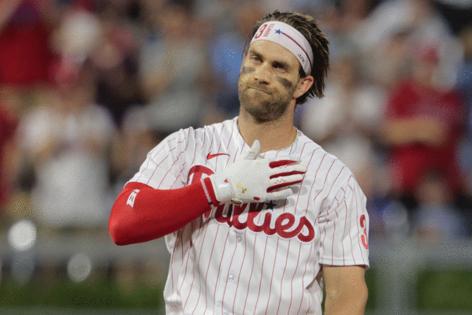 PHILADELPHIA — Bryce Harper and Zack Wheeler will have to wait a bit longer for the voting results of the MVP and Cy Young awards but Thursday provided some indication of where they stand.

The Cy Young and MVP finalists are scheduled to be revealed in early November with the winners being announced in the middle of next month. The awards are voted on by baseball writers and Harper and Wheeler should be among the top vote getters. The Players Choice award winners will be announced Oct. 28 at 6 p.m. on ESPN.

Harper is also a finalist for the Player of the Year award, which includes players from both leagues. He joins Toronto’s Vladimir Guerrero Jr. and the Angels’ Shohei Ohtani. Guerrero tied for the major league lead in homers with 48, led the American League with a 1.002 OPS, and totaled 6.7 WAR. Ohtani, a two-way player, hit 46 homers, posted a .965 OPS, and had a 3.18 ERA in 23 starts with 10.8 strikeouts per nine innings.

Wheeler is joined by Milwaukee’s Corbin Burnes and Los Angeles’ Max Scherzer for the NL’s Outstanding Pitcher Award. Wheeler led the majors in innings (2131/3) and topped the NL with 247 strikeouts. His ERA (2.78) trails both Burnes (2.43) and Scherzer (2.46).

An award for Harper

Harper will at least win one award this offseason as it was announced Thursday that he will receive a Musial Award, which are named after Stan Musial and celebrate “the greatest moments of sportsmanship and those in sports who embody class and character.”

Harper is being honored for checking in on Cardinals pitcher Genesis Cabrera in April, a day after Cabrera hit Harper in the face with a 97-mph fastball. The Musial Awards said it “was a tremendous show of empathy and sportsmanship, and diffused what could have been a volatile situation between the two teams.”

The incident caused Harper to miss seven of the next eight games, but he avoided being placed on the injured list and his mother said he must have had angels with him that night. He’ll be honored on Nov. 20 in St. Louis and the ceremony will air on CBS on Christmas Day.