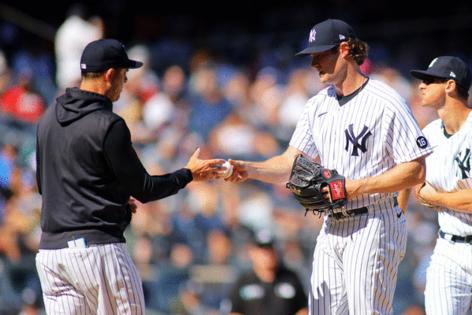 NEW YORK — After looking through different areas of the team — including coaches, players and manager Aaron Boone — to see what went so wrong with the New York Yankees' 2021 season, there are still so many unanswered questions.

Yes, the Yankees hitters underperformed this season. And this week, hitting coaches Marcus Thames and P.J. Pilittere paid for that with their jobs. The Bombers were thrown out a league-leading 22 times at home plate this season and seemingly that cost third base coach Phil Nevin his job.

But as everyone watches the Bombers’ two most-hated rivals — the Boston Red Sox and Houston Astros — play in the American League Championship Series for another trip to the World Series, those are clearly not the answers to why the Yankees are home still trying to figure out how to get back there for the first time since 2009.

At the end of the day, after the changes, the Yankees are still a team of big sluggers. The roster is still power-based and unathletic with very few contact hitters. They have very little versatility built into their roster and heading into 2022 a lot of questions about whether they are heading in the right direction.

After the season, we give the players and manager a grade. If we were to do that for GM Brian Cashman and the front office, it could be no higher than a D. They made some minor moves that had some big impact like getting Wandy Peralta for Mike Tauchman, and they acquired Clay Holmes who came in and was excellent for the Yankees down the stretch. Anthony Rizzo was the right move, but he was hamstrung by COVID-19. Joey Gallo gave the Bombers another desperately needed left-handed bat, but is the same type of streaky hitter the Yankees already had on the right side. Andrew Heaney was not a good acquisition.

Ultimately, the Yankees’ success and failures land at Cashman’s feet, as the only face of the front office. But the majority of his work comes in the winter, when he tries again to rebuild into a championship team. Last winter’s work resulted in a 92-win team that fell short again.

This winter, Cashman has a high bar to reach again. Aside from the first step of deciding if Boone is the manager going forward, here are some things the Yankees have to address to have a successful winter.

Luke Voit had a nightmare season, beginning with knee surgery in March, which he never seemed entirely to recover from. In fact, he was placed on the injured list at the end of the season. He struggled the few games he played and the Yankees went out and traded for Rizzo. The 30-year-old slugger is under team control through 2024. He made $4.7 million last year and will likely get a raise through arbitration. With Gleyber Torres now a second baseman, first is a spot that DJ LeMahieu could be moved to and Voit’s role would be basically eliminated.

WHO’S THE SHORTSTOP OF THE FUTURE?