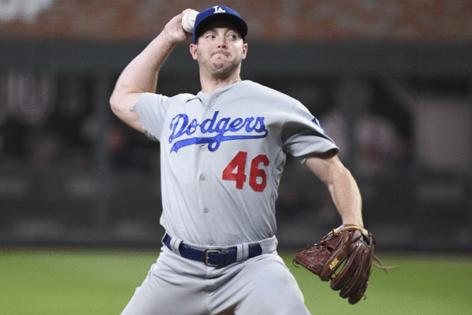 The starting pitcher for the Dodgers on Saturday, in Game 1 of the National League Championship Series against the Atlanta Braves: Corey Knebel.

What in the name of Tommy Lasorda is going on?

First things first: Max Scherzer would have started Saturday, had he not closed Thursday. The Dodgers decided to give Scherzer an extra day of rest and, well, someone had to start.

Tony Gonsolin could have. Knebel was not a starter in the minor leagues, or even in college. The Dodgers decided a reliever getting the first three outs was their best path to getting them all.

Knebel was the Dodgers’ opener, at a time Major League Baseball is exploring whether to put a close on the era of the opener.

Wall Street Baseball is the quest to find and exploit even the tiniest of advantages. Just win, baby, and who cares about the aesthetics?

The Rays might say their low revenue gives them no other option. What worries the league — and the players’ union — is that too many teams might try to copy this aspect of the Rays’ winning ways.

“From a fan’s perspective and baseball as a whole,” Scherzer said Saturday, “if you look at it more from the game outside and say, ‘Is this something that ... we want the game to go into? Do we want to see this in the regular season?’ my answer is no.

LOS ANGELES — The New York Mets committed $130 million to pitcher Max Scherzer, who will be 40 when his new contract ends. The Tampa Bay Rays committed $182 million to shortstop Wander Franco, who is 20 and has played 70...Read More

DETROIT — Here's the first thing shortstop Javier Baez brings to the table — stability at what has been for years a fatally unstable defensive position in Detroit.

The Tigers, according to Sports Info Solutions, have ...Read More