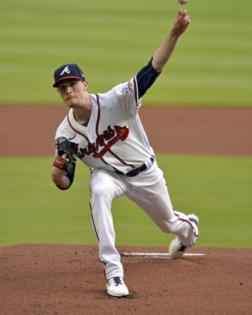 The lefty finished the season with an MLB-best 1.74 ERA in the second half. The Dodgers haven’t announced who will start Game 1, though manager Dave Roberts indicated Max Scherzer could still make his scheduled outing despite recording the save in their Game 5 victory over the Giants on Thursday.

Manager Brian Snitker hadn’t announced how the Braves’ rotation would align after Fried, but Ian Anderson and Charlie Morton will start the contests in some order.

“I feel really good about all three of the guys that we’re going to be featuring,” Snitker said. “But it’s a significant difference than a year ago when we started this tournament (and the Braves were patching together a rotation). I feel really good about where Max is in the season, where Charlie is and what he’s done throughout his career. I think it’s a really good feeling to know we have two guys like that that we could choose.”

For Fried, it will be another outing against his childhood team. The 27-year-old is a Santa Monica, California, native.

“It’s definitely kind of nostalgic of just being able to look back, and it’s obviously a team I was rooting for growing up,” Fried said. “But at this point in my career, I’m pretty settled in with the Braves. It’s the team I’ve been with the longest in my professional career, and definitely being able to make my debut here and kind of just experience everything that I have, my connection to the Braves right now is just as strong.”

More than 45 years after his final at-bat, Tony Oliva's stellar but truncated baseball career finally received the imprimatur that he and a legion of Twins fans had long craved: Hall of Fame.

Former Dodgers slugger Gil Hodges, who won championships as a player in Brooklyn (1955) and Los Angeles (1959) and managed the New York Mets to the 1969 World Series title, was one of four players elected to the National ...Read More

John Jordan “Buck” O’Neil, the Kansas City Monarchs star player and manager who was passed over for the National Baseball Hall of Fame shortly before his death in 2006, was elected to the hall on Sunday.

NEW YORK — You may have heard:

The business of baseball is closed down indefinitely, with the owners’ lockout of the players in the wake of the stalled negotiations over a new labor agreement. It’s another self-...Read More