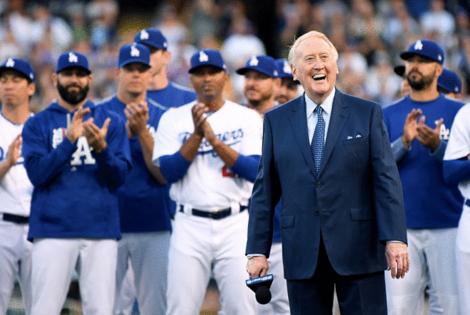 The best broadcaster in baseball history turns 94 next month. He shed his professional neutrality when he retired five years ago. He happily roots for the Los Angeles Dodgers now, marveling that a team with 110 victories this season still has no idea whether it will qualify for the World Series.

“I shake my head,” Scully said.

I shook my head when I saw Scully’s tweet Thursday. In the hours before the Dodgers played the San Francisco Giants in the decisive Game 5 of the National League Division Series, Scully tweeted that Thursday’s game would be “the most important game in the history of their rivalry.”

Dave Roberts heard about the tweet in advance of the game.

“As Vin always is,” Turner said, “right on the pulse.”

But here’s the thing: In 1951, and again in 1962, the Dodgers and Giants played games in which the winner advanced to the World Series.