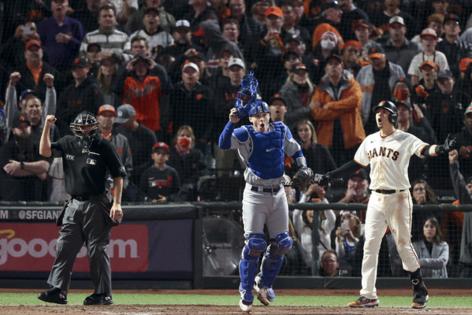 One of the greatest seasons in major league history ends with a blown call. Not a controversial call. Not on a play governed by an obscure rule. A blown call that will be revisited and discussed for years.

The San Francisco Giants’ historic run was extinguished Thursday when first base umpire Gabe Morales ruled Wilmer Flores swung at an 0-2 pitch from the Dodgers’ Max Scherzer with two outs in the ninth inning of the deciding Game 5 of the NLDS.

“That’s going to be the thing that is talked about quite a bit and I understand why,” Giants manager Gabe Kapler said.

A check swing is unlike any other call. Whether or not a batter has offered at a pitch is ill-defined in the rule book, is often deferred from one umpire to another, and the umpire burdened with making the decision doesn’t have a favorable view.

No one, however, except the man charged with making the call believed Flores swung. Outrage ensued, as did pertinent questions that don’t have easy answers.

—What’s the definition of a swing?

In the “Definition of Terms” section of the 2021 edition of the Official Baseball Rules, 83 words or phrases are explained. In just the “S” section, definitions are provided for the set position, a squeeze play, the strike zone and a suspended game. A swing is not included.

Umpires treat a check-swing strike call a lot like what U.S. Supreme Court Justice Potter Stewart famously stated in 1964 describing his definition for obscenity: “You know it when you see it.”

Ted Barrett, the umpire crew chief in the NLDS, tried to explain a swing after Game 5: “By the rule book, it just says, did he offer at the pitch? So, there’s some ambiguity there, but we do our best to try to be consistent, so players know what’s a swing and what’s not.”

A strike is described in the rule book as “a legal pitch when so called by the umpire, which (a) Is struck at by the batter and is missed. ..."