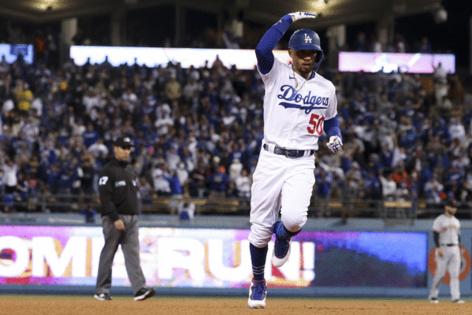 LOS ANGELES — Dodgers right fielder Mookie Betts sensed no anxiety among his teammates as they prepared for what might have been the last game of their season, no jitters or strange vibes or special energy as they faced elimination at the hands of the San Francisco Giants on Tuesday in Game 4 of the National League Division Series.

"I think everybody was kind of chill, relaxed, and wanted to play," Betts said. "It's not like we're all of a sudden going to start hitting it harder or throwing it further or throwing it faster, or whatever. So it's the same game we have been playing. It's just a win-or-go-home situation."

At least nothing the Dodgers hadn't been through during postseason play this year and last, after winning four straight elimination games dating to last year's National League Championship Series against Atlanta. And with ace Walker Buehler starting Tuesday, though on short rest, Betts liked the Dodgers' chances of extending their streak of dramatic escapes and extending their series to a Game 5 finale Thursday in San Francisco.

"I just know when our backs are against the wall, we got a guy named Walker Buehler that ends up getting us out of it," Betts said. "So he did it again today."

Buehler justified the Dodgers' faith in him by giving up only three hits and one run over 4 1/3 innings, and Betts provided valuable offensive support that kept the Dodgers going until they finally broke the game open. Their 7-2 victory wasn't a rout until late, but it couldn't have been a romp at all without key contributions from Betts, who has been the personification of chill in the most crucial of postseason situations.

After the Dodgers clawed out single runs in the first and second innings to chase Giants starter Anthony DeSclafani and left the bases loaded in the third without scoring, it felt as if they should have been leading by four or five runs, not merely two.

"We felt it, too," manager Dave Roberts said of the personnel in the dugout, "but the bottom line is the scoreboard is the only thing that does matter. These guys, the Giants, they do a great job of limiting damage, keeping their club in it, and then they kind of prey on momentum."

The right-handed-hitting Betts put needed distance between the teams in the fourth inning, breaking the offensive logjam by hitting a two-run home run to the opposite field in the fourth inning off reliever Jarlin Garcia. His home run, off a 93-mph four-seam fastball on an 0-and-1 count, doubled the Dodgers' lead to 4-0 and allowed the announced sellout crowd of 52,935 at Dodger Stadium to release the emotions it had been holding in.

Betts enjoyed the moment for the team, not for himself. "Obviously super-excited to just put some runs on the board," he said. "But I think it was just the 26 guys. Those are the most important guys that the feeling was for, and I think it gave us a lot of energy and we were able to continue to keep pressure on them and obviously win in the end."