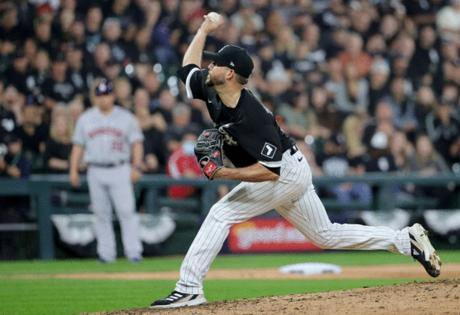 If you thought a postseason series featuring Tony La Russa and Dusty Baker would be controversy-free, you also probably believe in the tooth fairy.

Something was bound to happen that would turn the American League Division Series between La Russa’s Chicago White Sox and Baker’s Houston Astros into a grudge match, and leave it to Sox reliever Ryan Tepera to light the fuse on the dynamite.

Tepera on Sunday basically accused the Astros of sign stealing during the first two games at Minute Maid Park without citing any evidence other than the fact Sox pitchers had 16 strikeouts in their 12-6 win in Game 3 as opposed to 16 combined K’s in the two games in Houston.

Baker called it “heavy accusations” from Tepera and pointed out the Astros have almost the same OPS at home (.787) as on the road (.780) and have scored more runs on the road (436) than at Minute Maid (427). Furthermore, Baker added, the Astros don’t care about Tepera’s remarks — and Baker said he never had heard of Tepera.

“I haven’t heard anybody even talk about it, to tell you the truth,” Baker said. “You know, he can say what he wants to say. I never even heard his name before until we played the White Sox. So, no, man, I’m not bothered at all by it, really, because most of my life they’ve been talking stuff on me anyway, you know what I mean? So let them talk.”

Baker also cited the lyrics of an Eric Clapton song: “Before you accuse me, take a look at yourself.”

Third baseman Alex Bregman, the only Astros player made available to the media after the Game 4 postponement Monday, also shrugged off the remark.

“Whatever works,” he said. “Like, it’s all good. We’re just focused on winning games. That’s it.”

So it’s much ado about nothing — except for the fact a Sox player is accusing a team of cheating that already has been convicted of cheating, which is really something.

And no doubt the Astros won’t forget it, as catcher Martin Maldonado suggested when he tweeted: “Always good to get a extra motivation.”