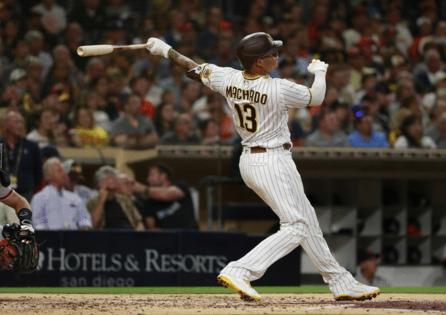 Selecting a Padres MVP between Fernando Tatis Jr. and Manny Machado is like choosing a flavor of ice cream. You can't go wrong. Chocolate, vanilla, strawberry, butter pecan and mint chocolate chip are the top-5 ice cream flavors, per Americans surveyed last year by YouGuv. Scoop me any of those five, I'm happy.

For me it came down to Tatis and Machado.

Barring a dramatic change in the season's final two weeks, I chose Machado.

In the less quantifiable realm of intangibles, I won't turn down what Padres management and players are selling: Machado has grown into this team's top leader. Don't hold that against him. You can't pin the team's disappointing win-loss record on him.

It's almost brazen to hand Machado the team's MVP award, given the terrific season by Tatis.

Heck, Tatis may be worthy of the National League's MVP award — which Machado, speaking before Tuesday's game, said Tatis deserves.

The 22-year-old has put together the best offensive season on the team. This cannot be disputed. Tatis has the most home runs (39) and offensive win shares (7.0, Baseball Reference) in the NL, ranks second in slugging percentage (.618) and third in OPS (.986) and stolen bases (25).

For pure entertainment value across one series, nothing in this Padres season topped the FernanDiego display of power hitting and baserunning at Dodger Stadium in April.