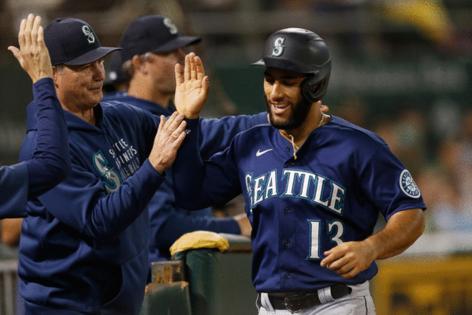 OAKLAND, Calif. — They’ve been in must-win mode since embarking on this final road trip. If their improbable dream of the postseason is to be realized, the Mariners' best way to overcome the long odds against them is to win every game and then let the rest sort itself out.

When they walked on the pristine playing surface of the Oakland Coliseum, facing another team still holding postseason hopes, the Mariners knew a win Wednesday night was imperative to add more hope to their hearts and minds.

With the Blue Jays losing to the Rays earlier in the day, both the A’s and Mariners knew they could trim Toronto’s lead ahead of them to two games and move a game ahead of Oakland.

Perhaps in past years that sort of pregame knowledge would’ve been detrimental, but this Mariners team embraced the situation, using the strong starting pitching of Chris Flexen and just enough run support led by Kyle Seager to pick up a 4-1 victory.

While the focus is on the postseason, that the win came against A’s left-hander Cole Irvin made it just a little sweeter.

After Irvin lamented giving up 10 hits to a team like the Mariners in their first meeting this season, Seattle has taken great pride in pasting his pitches in the games that followed.

Seager started off the fourth inning with a solo homer to deep center to give Seattle a 1-0 lead. It was his 35th homer of the season and also gave him a career-high 100 RBIs on the season. Seattle tacked on another run on a Tom Murphy RBI single. The Mariners added a third run on Ty France’s solo homer to left off Irvin in the fifth.

In a season where’s he’s proven to be the Mariners’ most consistent starting pitcher and perhaps the steal of last offseason’s free-agent class, Flexen added yet another strong outing to his portfolio.

Making his 29th start of the season, the lanky right-hander pitched seven innings, allowing one run on three hits with two walks and eight strikeouts to improve to 13-6 and lower his ERA to 3.56 on the season. It was his eighth start of seven-plus innings pitched and one run or fewer allowed.

The one run came in the fifth inning with the Mariners having already provided that 3-0 lead. After falling behind 2-0 to Matt Chapman, Flexen battled back to even the count at 2-2. After failing to get a swing and miss on a low fastball, Flexen left a fastball in the heart of the plate that Chapman crushed over the wall in deep center.

After retiring the next three hitters, the ever-intense Flexen cursed himself for the mistake during his entire walk from the mound to the dugout.