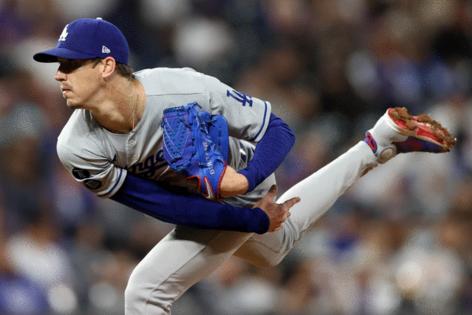 DENVER — The expectation was the Dodgers, when Clayton Kershaw and Tony Gonsolin came off the injured list earlier this month to make their rotation finally whole again, would benefit from quality starts almost every day as they chased the San Francisco Giants down the stretch.

Kershaw and Gonsolin’s health were questions but Max Scherzer, Walker Buehler and Julio Urías had become Cy Young Award candidates. Scripted bullpen games were in the past. The quintet would spell the relief corps and the team’s elite run prevention would continue with a slightly different formula.

But the rollout hasn’t gone as smoothly as anticipated. A night after Urías’ velocity dropped again for his second consecutive abbreviated outing, Buehler didn’t survive the fourth inning and the Dodgers’ pitching staff absorbed a rare letdown in the team’s 10-5 loss to the Colorado Rockies at Coors Field on Wednesday.

The result dropped the Dodgers (97-55) to 1 1/2 games behind the Giants in the National League West with 10 games left. The Giants played the San Diego Padres later Wednesday.

“I didn’t do my job,” Buehler said. “I think that’s the biggest thing. They gave me a lead and then I couldn’t protect it. My job is to set the tone and I didn’t do that.”

Buehler yielded five runs and seven hits across 32/3 innings. He faced 18 batters and nine of them hit balls in play with an exit velocity of at least 95 mph. He threw 74 pitches and generated just four-swing-and-misses — a season low.

It was just the third time this season that he has failed to log at least six innings. Two have come in his last four starts.

His earned-run average has climbed from 2.05 to 2.58 during that span. Perhaps related, he has logged a career-high 195 innings this season — 12 2/3 innings more than his previous high for a regular season.

“I don’t think that the time of year or the innings is something to blame,” Buehler said. “I think it’s a me problem and something that I need to address and figure out.”

The Rockies (71-80) chased Buehler in the fourth inning when Germán Márquez, the opposing starting pitcher, lined a two-out, two-run double. The hit was the Rockies’ sixth of the inning — Brendan Rodgers led off with a home run before Buehler surrendered four straight singles.