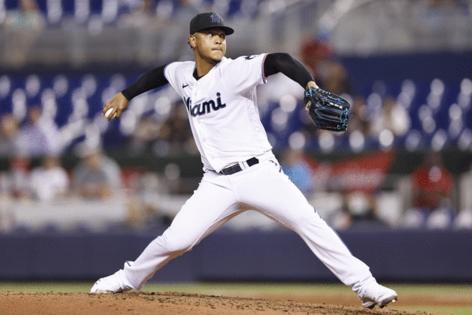 Hernandez struck out a season-high seven batters but also gave up three home runs in the Miami Marlins’ 7-5 loss to the Washington Nationals that allowed the Nationals to jump out to an early lead that they would build on as the game progressed.

Yadiel Hernandez struck first, sending an elevated slider to straightaway center in the second inning. Juan Soto, who was a triple shy of hitting for the cycle and reached base five times, lifted a low and inside slider to right center for a two-run home run in the third. And Luis Garcia hit a four-seam fastball just outside of the zone in the fourth for his sixth home run of the season.

Hernandez faced two batters in the fifth inning, both walks, before manager Don Mattingly went to the bullpen.

The Nationals (63-89) added three more runs in the seventh off Zach Thompson.

The Marlins broke up the shutout in the bottom of the fourth on a Lewin Diaz RBI single that scored Lewis Brinson, who had doubled, scored a second run in the sixth on Jesus Sanchez’s RBI single that scored Bryan De La Cruz, who had tripled and tacked on three more in the ninth with Nick Fortes’ two-run home run — his third home run in his first 11 MLB plate appearances — and a solo shot from Sandy Leon.

Nationals pitcher Josiah Gray in the top of the sixth inning hit low line drive to right field with two outs. The play is almost always a base hit. This time, it resulted in an inning-ending out.

Marlins right fielder Sanchez, who had already made a web-gem plays in this series with his barehanded grab on Monday, raced for the ball and threw to Diaz at first base in time for the out.