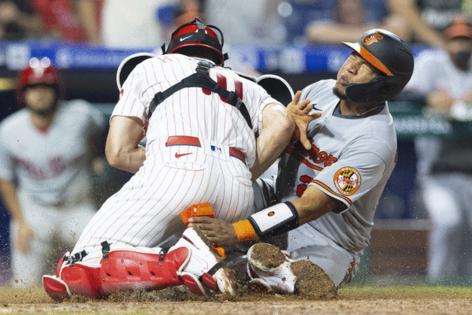 PHILADELPHIA — Bryce Harper seemed almost surprised Wednesday night when he fielded the ball in right field and noticed that the potential tying run was headed home. The ball was not hit particularly hard toward Harper with two outs in the eighth inning of a 4-3 win, but the Orioles still decided to test the outfielder’s arm.

Harper threw flat-footed from shallow right field and fired a 89.2-mph strike to home, easily beating Baltimore catcher Pedro Severino and allowing J.T. Realmuto to apply the inning-ending tag. It pushed the Phillies three outs closer to a needed win and prevented the bullpen from blowing another lead.

The win improved the Phillies to four games above .500 with 10 games remaining. At the worst, they’ll start Thursday three games behind first-place Atlanta, who finish a series Thursday in Arizona while the Phillies open a four-game set at home vs. the Pirates.

The Phillies ended the eighth with Harper’s throw and started it with a terrific catch at first by Matt Vierling, who snagged a line drive by Ryan Mountcastle. It could have been a different inning for reliever Cam Bedrosian if his defense didn’t support him the way it did.

The crowd booed in the bottom of the seventh when Harper jogged to first base after being intentionally walked. The player they came to see in South Philly was being denied a chance at bolstering his MVP case by delivering a needed insurance run.

For the second straight night, the Orioles challenged another Phillies hitter to beat them. And it is a strategy that will likely be employed often during the season’s final 10 games. But the crowd was not booing for long.

Realmuto, who delivered Tuesday’s walk-off hit after Harper was intentionally walked, came through again with a single up the middle to give the Phillies a two-run lead. Opposing teams — especially Atlanta next week — will be tempted to give first base to Harper, baseball’s hottest hitter in the season’s second half, and test their luck against whoever is batting behind him.

But the best way to quell that temptation is to do what Realmuto has done for two straight nights.