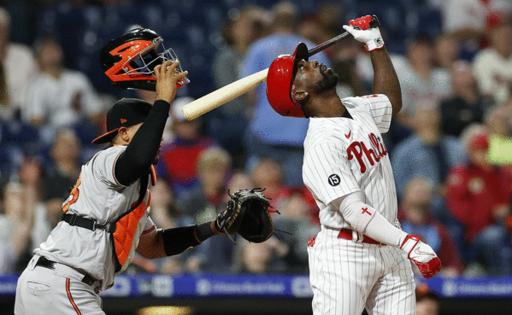 PHILADELPHIA — Bryce Harper walked, bat in hand, a few steps down the first-base line when his 401-foot fly ball landed in the glove of Baltimore Orioles center fielder Cedric Mullins, whose back was pressed up against the fence.

It was that kind of night for the Phillies.

Joe Girardi tried to warn everyone. A few hours before Monday night’s game, the manager noted that John Means is a “really tough pitcher.” The Phillies would have their work cut out for them, Girardi said. Merely showing up wouldn’t be good enough, not even against the woeful, 102-loss Baltimore Orioles.

Sure enough, Means lived up to billing and the Phillies mustered only four hits in a 2-0 loss before an announced crowd of 21,440 at Citizens Bank Park.

Not exactly the way they intended to start their final homestand with a National League East title -- and the playoff spot that has eluded them since 2011 -- within sight.

The Phillies slipped to 76-74, 2 1/2 games behind the division-leading Atlanta Braves, who were playing in Arizona. If the Braves go 7-7 in the next 14 games, the Phillies would have to go 8-4 to tie them and force them to play a makeup game against the Colorado Rockies on Oct. 4, one day after the scheduled conclusion of the regular season.

Means has a 3.25 ERA, making him one of the few bright spots in a season that can’t end soon enough for the Orioles. But the Orioles had also lost the 28-year-old left-hander’s last eight starts. They had dropped eight of their last nine games overall.

“I thought he threw a good game,” Girardi said. “He seems to give you a different look every time.”

Girardi thought Means’ changeup, in particular, gave the Phillies trouble. He held them to four singles and had one serious rally. They put two on and had one out in the seventh inning, but Means got Didi Gregorius to ground into a fielder’s choice before reliever Cole Sulser came on and got Freddy Galvis to fly out.

The Phillies tried to make noise in the ninth inning. But Harper skied a ball to the wall in center field to open the ninth inning before Realmuto flew out to deep right and Andrew McCutchen popped out.