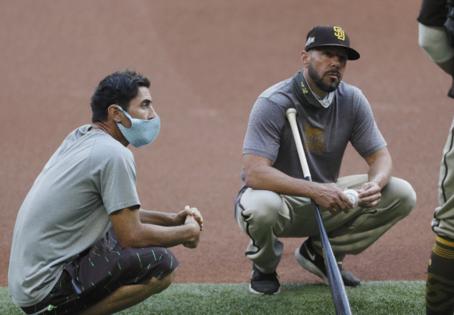 The Padres began a road trip Sept. 10 with a fighting chance and ended it looking like they were fighting with themselves.

The shouting match in the dugout Saturday night between Manny Machado and Fernando Tatis Jr. in itself was not the problem. But it occurring, several people in the organization said, is a product of one of the Padres' most pressing issues:

Manager Jayce Tingler does not possess the sway to have quashed a situation that had been brewing for weeks.

How much of that falls directly on Tingler and how much is due to a distrust between players and the front office is debatable. And it really isn't important. Regardless, the Padres have some fixing to do.

Machado, a veteran who has acknowledged learning from his own mistakes as a young player, stepped in Saturday in a moment in which he felt the team's young superstar needed to be set back on track. In this instance, Tatis had become incensed at a coach telling him essentially what Machado then told him — to pick his head up and get on the field and do what he's capable of because the Padres needed him.

These things happen in a long season, especially in the heat of a playoff chase gone off the rails.

Multiple people inside the organization said the situation with Tatis has been building for weeks, as the 22-year-old has grown increasingly frustrated with the team's postseason chances slipping away and his being unable to lift the Padres on his shoulders. He was talked to by a veteran player about his brooding on at least one occasion before Saturday.

There are differences of opinion among some of the team's on-field personnel. But one thing virtually everyone agreed on in the hours after Saturday's mini-brouhaha was that it was the culmination of an issue a stronger manager would have taken care of weeks ago.

There are some in the organization who believe this is an example of why the team needs a new voice and a greater influence in the manager's office.

Again and again, people in and around the team have said for weeks, the Padres need an experienced manager who commands the respect of players such as Machado, Tatis, Eric Hosmer and others.

LOS ANGELES — The Dodgers were deflated, decimated and desperate for one reason, any reason, to continue clutching to the fraying fringes of a season.

LOS ANGELES – The National League Championship Series is headed back to Atlanta, where the Braves need one win to secure a World Series spot - and avoid the same outcome as last season.

PHILADELPHIA — Bryce Harper and Zack Wheeler will have to wait a bit longer for the voting results of the MVP and Cy Young awards but Thursday provided some indication of where they stand.

They were both named finalists...Read More