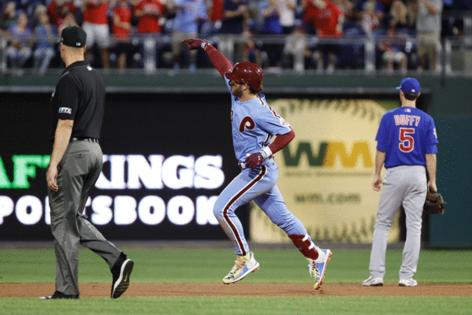 PHILADELPHIA — Bryce Harper stood Thursday night near the batter’s box in Citizens Bank Park, savoring the moment just like everyone else seemed to be doing.

The Phillies trailed by seven runs after three innings, but now the entire ballpark — Harper, too — watched his incredible season continue. Harper eyed his three-run homer as it soared toward the second deck in right field, hollered toward the dugout, and circled the bases as a blowout loss became a blowout 17-8 win over the Chicago Cubs.

Harper’s homer in the seventh gave the Phillies a seven-run lead, the deficit they faced when he stood in right field and watched the team’s “bullpen game” implode. But the Phillies refused to fold. And Harper — who seems to improve his MVP chances every night — led the way.

He started the fourth inning with a double, giving the Phillies some life despite trailing by seven runs. Six of the next seven batters reached base before Harper walked in his second plate appearance of the inning and J.T. Realmuto tied the game with a two-run single. The Phillies had a seven-run inning after allowing seven runs in the third.

In the sixth inning, Harper put the Phillies ahead with a double as they climbed all the way back from down 7-0 to up 8-7. Harper reached base five times, had three hits, and drove in four runs. He leads the majors with a 1.058 OPS and has the second-highest batting average (.314) in the National League.

Since the All-Star break, Harper has baseball’s third-best batting average (.346), second-best on-base percentage (.479), and second-best slugging percentage (.741). He is willing the Phillies toward the postseason and pushing himself toward an MVP Award.

The comeback win helped the Phillies gain ground in the division after Atlanta’s game was rained out. They now trail the first-place Braves by three games with 16 games remaining, three of which are in Atlanta. The Phillies play three games this weekend against the Mets, who have lost seven of their last 10, while the Braves play three in San Francisco against the 95-win Giants. The Phillies have a chance this weekend to get even closer.

Harper and Jean Segura’s three hits led the Phillies while Odubel Herrera and Andrew McCutchen each had two. The Phillies had eight players who drove in a run and every starting position player had at least one hit. You need more than one player to erase a seven-run deficit.

McCutchen’s two-run double in the fourth gave the Phillies their first runs and Segura’s two-run single in the eighth pushed the run total to 17. It was the second time this season the Phillies scored 17 runs.

The Phillies needed to use their fourth pitcher of the game before the end of the third inning as their bullpen game imploded for a second straight time.

Cam Bedrosian started and pitched into the second inning before being replaced by Matt Moore, who was lifted for JD Hammer after walking two of the first three batters he faced in the third. And that’s when trouble arrived.

Hammer walked a batter to load the bases before hitting the next batter to bring in a run. He was then tagged by an RBI single, a two-run double, and a three-run homer by Matt Duffy. Hammer entered with the game scoreless and the Phillies were down seven runs when he was yanked after he faced seven batters.

The Phillies opted this month to use a cast of relievers every fifth day instead of a traditional starting pitcher. They are 2-1 in their bullpen games but their pitchers have allowed 20 earned runs in 28 innings. The strategy dug the Phillies a seven-run hole on Thursday, but they managed to dig themselves out.