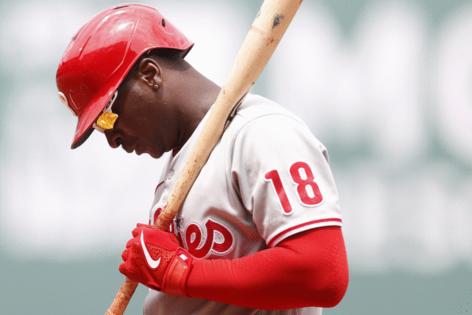 PHILADELPHIA — Phillies shortstop Didi Gregorius blames the worst season of his career on an elbow condition he says developed after he was vaccinated for COVID-19. He claims the shots caused him to develop pseudogout — a form of arthritis characterized by sudden, painful swelling — in his right elbow which debilitated his performance.

“Some people say it’s from the vaccine. I will say it’s likely from that, too,” Gregorius told The Philadelphia Inquirer before Wednesday’s game. “But when you say that, everyone looks at you like you’re stupid because the vaccine is not supposed to be like that or give you that reaction.”

Paul Offit, a vaccine expert at Children’s Hospital of Philadelphia, said that no vaccines, including those for COVID-19, could cause pseudogout. “It has nothing to do with the vaccine,” he said. It is possible, however, that a vaccine could cause a flare of pseudogout if Gregorius already had it and didn’t know about it. However, the flare would only last a few days. A flare lasting months “doesn’t make any sense.”

Ravina Kullar, a spokesperson for the Infectious Diseases Society of America and an infectious diseases consultant for Los Angeles nursing homes, said she knew of two reports of short flares of rheumatoid arthritis after COVID-19 vaccination. She was not aware of any reports of gout or pseudogout after vaccination. Such a reaction might be possible, she said, but it likely wouldn’t last long. A patient’s doctor would have to rule out all other potential causes.

Gregorius was one of the Phillies’ top hitters last season and signed a $28 million contract in the offseason, but he has been one of baseball’s least productive offensive players in 2021 and is valued roughly the same as a replacement-level player in Wins Above Replacement.

Gregorius, 31, started experiencing elbow discomfort and swelling in April, which he said began shortly after receiving the second dose of the vaccine. Pseudogout is treated with medicine, but Gregorius said the discomfort has not gone away.

Pseudogout, also known as calcium pyrophosphate deposition disease or CPPD, is a type of arthritis that occurs when calcium pyrophosphate dihydrate crystals build up in cartilage. It most commonly affects knees but can affect other joints. It can last for days or weeks. Risk factors include joint injury, genetic predisposition, excessive calcium or iron or too little magnesium in the blood, and problems with thyroid and parathyroid glands, according to the Mayo Clinic. The crystal deposits can cause joint damage.

Gregorius’ right elbow is his throwing arm and the lead arm of his left-handed swing. Gregorius said his doctor, not a member of the Phillies, told him the vaccine may have caused it.

“He didn’t give me like 100 percent,” Gregorius said. “Of course, this is the joint that I use the most and I get it on my elbow.”

The Phillies were one of the last remaining teams to meet Major League Baseball’s 85% vaccination rate until they crossed the threshold on Wednesday. They declined to comment on Gregorius’ claim about the vaccine.