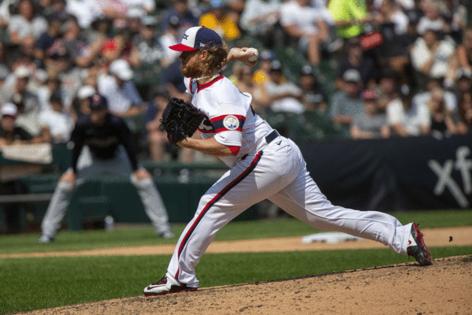 Approximately 70 of his friends and family attended Wednesday’s game and those seated behind the Cubs’ dugout behind the third-base line made themselves heard in the fifth inning. Schwindel, born and raised Livingston, N.J., 100 miles north of Philadelphia, hit a two-run homer in the Cubs’ 6-5 walk-off loss to the Phillies, prompting his personal cheering section to go crazy. Five were wearing white T-shirts with a picture of Schwindel and his nickname on the front, with each donning a letter on the back to collectively spell out “TANK!”.

“It’s always fun when Frankie comes in the dugout after a home run, I’ll say that,” manager David Ross said.

“He’s always coming in with a lot of energy and pretty proud of himself when he comes in and it shows with a big smile on his face. He’s got a lot of supporters that were loud tonight and it definitely stands out. When he hits them here close to home, it’s a good moment for him.”

Schwindel, 29, has enjoyed many good moments in a Cubs uniform since his call-up July 30, from go-ahead hits in the late innings to timely home runs. His consistency through 164 plate appearances and counting is one of the most impressive parts of his success. After collecting two extra-base hits Wednesday, Schwindel is hitting .362 with a .409 on-base percentage, 1.093 OPS and 1.8 WAR.

“When I grew up, I hated striking out and hated walking,” Schwindel told the Tribune on Wednesday. “Now there’s a lot of value in the walk and some teams have the philosophy, ‘strike out as many times you want as long as you’re hitting 30-plus homers.’ I think I’m a little mixed between where if there’s something over the plate, I’m trying to make something happen rather than being too selective and get behind. These guys are too good where you don’t want to get to their secondary stuff and their plus-out pitches.”

Schwindel takes a straightforward approach: If the ball is over the plate and there are runners on, he’s going to attack.

“But I’m trying to be a little smarter than just going up there hacking,” he added.

Through 40 games with the Cubs, Schwindel hasn’t shown many offensive weaknesses. He feasts on fastballs, something opposing pitchers continue to leave in the strike zone. Entering the game, Schwindel owned a .359 average and .772 slugging percentage versus fastballs. His home run Wednesday came on a sinker down and away that he hit to right for his 12th as a Cub and first opposite-field homer this season. All but two of those home runs were hit off a fastball. Schwindel’s barrel percentage, which measures how frequently a well-struck ball features an exit velocity of at least 98 mph, is rated among the top quarter of hitters. His 7.1 barreled percentage is tied with Kris Bryant, Willy Adames, Nick Castellanos and Albert Pujols.

“Obviously, they’re going to game plan for me now that they’ve seen me and have more scouting reports and stuff,” he said. “So I think if I stay within the zone, I’m going to be OK.”