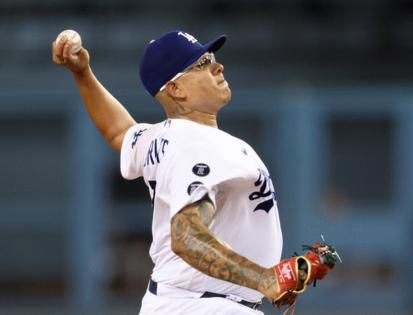 LOS ANGELES — Their pursuit of the San Francisco Giants was beginning to feel like a Sisyphean task for the Los Angeles Dodgers, who couldn’t seem to gain ground on the National League West leaders no matter how well they played.

The Dodgers won the first five games of their six-game homestand and couldn’t cut into San Francisco’s lead. They won seven of nine entering Wednesday and actually lost ground because the Giants had won nine straight.

But the Giants finally slipped Wednesday night, and the Dodgers took advantage, pushing that huge stone closer to the top of the hill with a 5-3 victory over the Arizona Diamondbacks in front of a crowd of 46,520 in Chavez Ravine.

The Dodgers’ sixth straight win, combined with San Francisco’s 9-6 loss to San Diego, moved the Dodgers to within 11/2 games of the Giants with 15 games left and marked the first time since Sept. 4 that the Dodgers had gained ground on their division rivals.

“We just have to take care of us,” said closer Kenley Jansen, who struck out the side in the ninth for his 33rd save. “We can’t worry about the Giants. They’ve been playing unbelievable baseball, but if we take care of business and play Dodgers baseball, I don’t think there’s anybody better than us in this league.

Justin Turner and Max Muncy continued to put Albert Pujols’ bats to good use, Turner collecting three singles and scoring twice and Muncy hitting his team-leading 34th homer and a single to lead a 14-hit attack. Gavin Lux provided two big RBI singles from the bottom of the order.

The left-hander, who was slowed by major shoulder surgery early in his career, is 18-3 with a 2.99 ERA and will have three more starts to become the first Dodgers pitcher to win 20 games since Clayton Kershaw in 2014.

“Yeah, that would be incredible,” Urias said through an interpreter. “This is the first full season where I feel the reins have been pulled off and I’ve been able to do what I’ve done. It’s been an incredible year.”