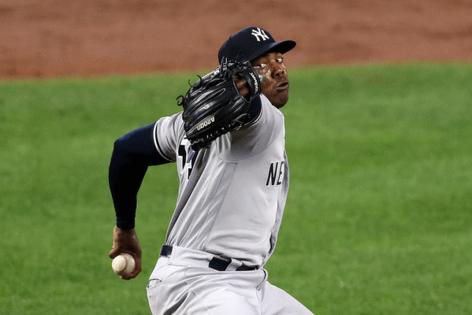 BALTIMORE — Cedric Mullins has spent this season establishing himself as a fixture in the Orioles’ future. Of late, Austin Hays has done the same.

But heroics from each of the dynamic outfielders were not enough to prevent a 4-3 loss to the New York Yankees on Wednesday nigh tat Camden Yards.

For much of the game, it seemed as if the Orioles’ highlight came in the second inning, when Mullins leaped and twisted in center to rob New York catcher Gary Sánchez of a home run. Then Hays, who perhaps had the best view of Mullins’ catch as the right fielder beside him, hit his second home run of the night, a two-out, two-run shot in an 0-2 count in the eighth inning to put Baltimore (46-99) ahead 3-2.

But rookie closer Tyler Wells could not hold a lead for his second straight outing. He opened the ninth with his second walk in as many appearances, matching his total from his previous 25. A subsequent single and double steal preceded Brett Gardner’s bloop into center to reverse the score amid a sudden downpour of rain — and chants of “Let’s Go Yankees.”

It provided a disappointing finish to a game in which two young outfielders continued to brighten their stars. Orioles manager Brandon Hyde has clamored for Mullins as a Gold Glove candidate for much of the past two seasons, and Wednesday’s play alone made his case. With two outs in the top of the second inning, Mullins leapt at the wall to rob Sánchez, his back facing the field. A crowd of 10,402 split between New York and Baltimore fans shared a brief silence before Mullins casually flipped the ball to Hays, prompting equal eruptions of elation and disappointment.

Pitcher John Means pointed out toward him with a large smile on his face, while Sánchez could be seen fittingly mouthing “Wow.” It was the most impressive rejection of a home run at Camden Yards by an Orioles outfielder since Hays robbed Toronto Blue Jays star Vladimir Guerrero Jr. almost exactly two years ago, with Boston Red Sox outfielder Jackie Bradley Jr.’s denial of a potential Trey Mancini walk-off home run also a highlight at Oriole Park that year. In the final game of that season, Baltimore right fielder Stevie Wilkerson returned the favor, robbing Bradley of a go-ahead home run while tumbling over a short fence at Fenway Park.

An inning later, Yankees shortstop Gio Urshela wisely hit a ball where even Mullins could not catch it, his two-run home run providing a lead New York was four outs from holding onto when Hays homered for a second time. His first, a sixth-inning solo shot, came off Nestor Cortes Jr. and accounted for their only damage against the former Oriole as he struck out 11.

More frequently than other starter this season, Means has given the Orioles a chance to win. Yet Wednesday marked the eighth straight time they failed to do so with their ace left-hander on the mound.

He threw more than 100 pitches for the first time since his May 5 no-hitter and pitched into the sixth inning. Although Means has had trouble with home runs this year, the curveball low in the strike zone to Urshela became the first of that offering to leave the park this season. Among pitchers who had thrown at least 100 curveballs, only two had produced a slugging percentage with that pitch than Means entering Wednesday.

After initially struggling out of a two-month stint on the injured list, Means has a 3.00 ERA over his past four starts.

“He’s a perfectionist, and he’s a big time competitor and he feels like when he’s out on the mound, he feels like we should win the game,” Hyde said before the game. “When we don’t, then he takes it upon himself to feel like he made a mistake for us to lose it, which normally isn’t the case.”

Having exited Tuesday’s game after one plate appearance with a recurrence of the right side soreness that has pestered him for more than a week, Mancini seemingly made a quick return to the Orioles’ lineup, only to make a quicker exit. He was part of Hyde’s original lineup Wednesday afternoon only to be removed less than 15 minutes later.

“He took some swings in the cage, just still feels it a little bit,” Hyde said. “We’re not going to push him on this, and the right thing to do is to give him another day or two and just kind of evaluate it every single day.”

Mancini was recognized pregame as the Orioles’ nominee for the Roberto Clemente Award. He and Orioles assistant hitting coach José Hernández both wore Clemente’s No. 21 in recognition of the league’s day of recognition for one of its greatest humanitarians.