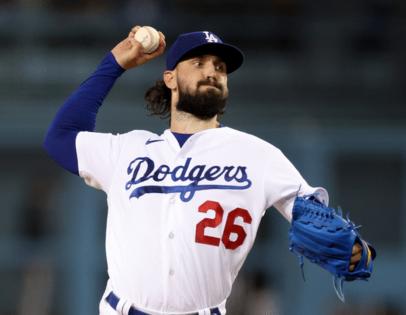 The Dodgers became the second team to clinch a postseason berth in 2021, officially extending their streak of playoff appearances to nine seasons, with their 8-4 win over the Arizona Diamondbacks at Dodger Stadium on Tuesday.

It’s a checkpoint just 10 of 30 clubs will reach. They rather would have waited another day.

The Dodgers sealed their spot Tuesday because the San Diego Padres lost to the San Francisco Giants, the club the Dodgers are still chasing for the coveted National League West title. As a result, instead of gaining a game on the Giants in the standings, the Dodgers remained 2 1/2 games behind their rivals to the north in the division race with 16 games remaining in the regular season.

The day began with the Dodgers (93-53) needing a win and losses from two of the Padres, the Cincinnati Reds and the St. Louis Cardinals. The Reds were the first to oblige, falling to the Pittsburgh Pirates. The Cardinals then toppled the New York Mets in 11 innings. The plummeting Padres later lost their fifth straight game, handing the Giants their ninth consecutive win.

As it stands, the Dodgers, owners of the second-best record in the majors, would play against the Cardinals in the do-or-die wild-card game at Dodger Stadium on Oct. 6. St. Louis resides 17 games behind them in the standings.

The Dodgers, for all their success this season, haven’t constructed many games by the book like Tuesday’s victory. Their offense thumped, clubbing three home runs, and continued tacking on runs after an early outburst. On the mound, they used a No. 5 starter to complete a turn through a five-man rotation for the first time in months to post their fifth win in a row.

That starter was Tony Gonsolin, who recorded his best outing of the season. The right-hander had been handcuffed by high pitch counts in nearly all of his first 11 starts this season.

On Tuesday, in his second outing since coming off the injured list, he retired the first six batters in order on just 20 pitches. He ended up throwing 67 pitches over five scoreless innings. He gave up two hits, walked two and struck out six.

Gonsolin’s performance, a night after Clayton Kershaw’s return from the injured list, concluded a dominant turn through the rotation. Julio Urías, Walker Buehler, Max Scherzer, Kershaw and Gonsolin combined to hold opponents to three runs with 32 strikeouts over 31 1/3 innings.

The Dodgers gave Gonsolin a lead in the first inning on back-to-back doubles off Arizona right-hander Luke Weaver by Max Muncy and Trea Turner. Muncy, using Albert Pujols’ bat, crushed a two-run home run in the third inning. Turner cracked a solo home run in the fifth inning and Will Smith blasted one in the sixth.

The power display has been a recipe for success; the Dodgers are now 21-1 this season when they collect at least three home runs. They’ll need more of those and more Giants losses to reach their goal of a ninth straight division title.

Justin Turner was named the Dodgers’ nominee for the 2021 Roberto Clemente award on Tuesday. It’s the fourth time in five years that Turner was chosen as the team’s nominee; he was also one of the 30 finalists in 2017, 2018, and 2020.

Scherzer was selected as the Washington Nationals’ nominee; the Nationals traded Scherzer to Los Angeles at the July 30 deadline. Scherzer, the front-runner for the NL Cy Young Award, is a nominee for the first time.

Kershaw is the last Dodger to win the award in 2012.

“It’s something that’s really special to myself and my wife, Kourtney, something we take a lot of pride in is giving back to the community, helping people who are less fortunate, people in need, helping people get up after getting knocked down and getting back on their feet,” Turner said. “And to be the nominee on this team, with a lot of guys who do a lot of great things in our community, is pretty special and something we don’t take for granted.”

Dodgers closer Kenley Jansen was reinstated from the paternity list before Tuesday night’s game. The Dodgers optioned right-hander Mitch White to make room on the active roster for Jansen.

Jansen finished last week by pitching on three straight days for the first time this season. He went on leave Sunday, the day his wife, Gianni, gave birth to their third child, a daughter named Key’Gia Keziah. The right-hander tossed a 1-2-3 ninth inning to close the Dodgers’ win Tuesday.

ATLANTA — Max Scherzer was scheduled to speak to the media via Zoom soon after the Dodgers landed at Hartsfield-Jackson Atlanta International Airport on Friday night. News conferences are customary for starting pitchers ...Read More

The 65-year-old is currently acting as a special assistant for the Giants after being their ...Read More

“Something that has been ...Read More