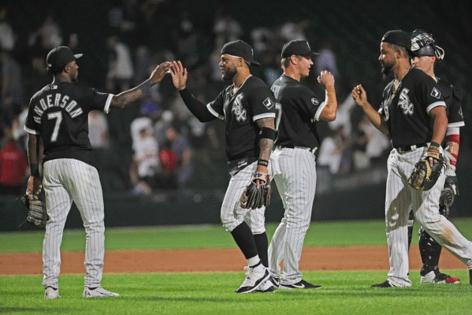 Shortstop Tim Anderson was also back from the IL and had one hit in five at-bats.

Those were two positive developments for the Chicago White Sox, who beat the Angels 9-3 in front of 21,848 at Guaranteed Rate Field.

Giolito allowed three runs on three hits with eight strikeouts and two walks in four innings. He had been on the IL since Sept. 1 with a strained left hamstring suffered during his last start Aug. 31 against the Pittsburgh Pirates.

Anderson had been on the IL since Aug. 29 with a left hamstring strain.

“He’s our igniter,” Sox manager Tony La Russa said before the game. “There’s a plan now in place that he plays every other day for several games and then see how he feels.”

The Sox regained Anderson and Giolito but lost outfielder/infielder Andrew Vaughn and reliever Ryan Tepera to the IL in a bevy of moves announced before the game.

The Sox placed Vaughn on the 10-day IL with lower back inflammation.

A couple of hours before the game, the Sox placed Tepera on the 10-day IL with a cut on his right index finger and recalled reliever Jace Fry from Triple-A Charlotte.

ATLANTA — Max Scherzer was scheduled to speak to the media via Zoom soon after the Dodgers landed at Hartsfield-Jackson Atlanta International Airport on Friday night. News conferences are customary for starting pitchers ...Read More

The 65-year-old is currently acting as a special assistant for the Giants after being their ...Read More

“Something that has been ...Read More