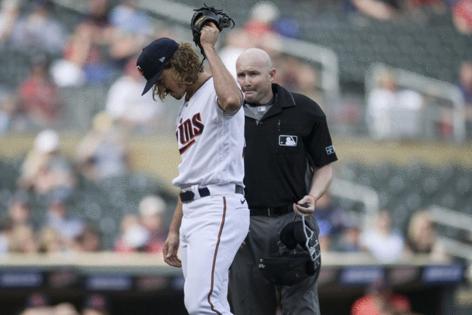 MINNEAPOLIS — If only Ryan Jeffers had somehow been able to play both games of Tuesday's doubleheader, the Twins might have come out with a sweep instead of a split.

The catcher went 3-for-3 in the second game, ramping up his production with each at-bat: a single in the second inning, a two-RBI double in the fourth and a two-run homer in the sixth. He drove the Twins to a 6-3 victory at Target Field in front of an announced crowd of 18,905. But the afternoon's 3-1 loss — with Ben Rortvedt catching — had already officially eliminated the Twins from the postseason.

A repeat of the afternoon disappointment seemed likely after starter Charlie Barnes allowed a four-hit, three-run fourth inning, including back-to-back RBI doubles from Amed Rosario and Jose Ramírez plus Franmil Reyes' RBI single. But his offense rebounded even more, chasing Cleveland starter Logan Allen from the game in the bottom of that inning.

Jorge Polanco and Miguel Sano hit singles off Allen before both scored on Jeffers' double to the left field corner. Willians Astudillo sent Jeffers home on his own RBI double off the back wall, with Nick Gordon's RBI single taking the Twins from a 3-0 deficit to a 4-3 lead.

The Twins extended that lead in the sixth inning. Rob Refsnyder hit a double down the left field line, and Jeffers' homer to the center field deck sent them both home.

Jeffers' inclusion might not have been the only what-if for the afternoon game. Another was if starter Joe Ryan had actually lasted the full seven innings as he intended before an injury cut his solid outing short. He took a line drive from Myles Straw off his right wrist — his pitching hand — in the top of the sixth.

Ryan didn't even bother to try to scoop up the ball and make the out at first. Nor did he pause in his stomp toward the dugout.

The Twins starting pitcher, who struck out five batters and allowed just one run in five innings Tuesday afternoon against Cleveland, left no question about whether he could continue the game, beelining straight for the tunnel back to the clubhouse, tossing his glove down in frustration on his way.

That big display, only for the X-rays to come back negative and for Ryan himself to deem himself "fine" after the game. Ryan apologized for losing his composure in the way he left the field after suffering a right wrist contusion. The rookie said he felt more shock than pain, adding he's not too worried about missing his next start.

"That's the first time really anything on the field has happened to me, so I didn't really know the protocol," he said. "I should have handled that a little more professionally."

Ryan joked his father is probably already planning on putting him through an offseason drill the two used to do growing up, when Dad, as catcher, would throw a tennis ball at his son right after he released a pitch to prepare him for a moment like Tuesday.

Ryan left the game at 1-1, but in the final inning after his departure, Danny Coulombe allowed Harold Ramirez to single on a ground ball before Ramirez advanced on Rortvedt's passed ball. He walked Bradley Zimmer ahead of Austin Hedges' RBI double to the left field corner. Pinch hitter Yu Chang then hit an infield bouncer to score another run to seal the Twins' loss.

The season hasn’t gone how anyone inside the organization had hoped. Miami will finish with a ...Read More

With the punchless Phillies desperate for quality starts, especially from their top three ...Read More