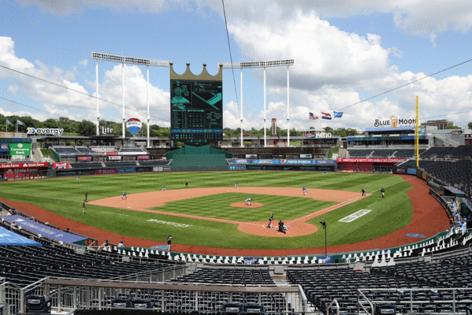 John Sherman, the Royals’ primary owner, said in a news conference that the Royals “need to start thinking about our plans for a stadium over the next five to 10 years.

Left unanswered was a specific location of a new stadium. But Sherman provided this clue:

“We need to have a positive impact in the quality of life for our citizens in Kansas City with a particular focus on those underrepresented parts of our community.

“We’re a little beyond just listening to others’ ideas. We are conducting an internal process to help us evaluate our options for where we play, and one of those options is to play downtown baseball.”

The Royals previously have addressed that by funding the Urban Youth Academy and Negro Leagues Baseball Museum in the 18th and Vine entertainment district. Royals general manager Dayton Moore, who on Tuesday was promoted to president of baseball operations, helped develop the academy to promote youth baseball.

Sherman said he expects taxpayers would be involved in funding a new stadium. In 2006, Jackson County voters approved a 0.375% sales tax for improvements to Arrowhead and Kauffman stadiums. Work on Kauffman Stadium, which included a restaurant in right field, the outfield kids’ area, four new gates, and the Crown Vision scoreboard, began after the 2007 season and was completed by Opening Day in 2009.

As part of the renovations, the Royals and Chiefs extended their leases to 2031.

“Taxpayers are involved today the way this stadium and the renovation was financed,” Sherman said. “I would anticipate that again it would be a public-private partnership. How that’s structured I think that’s part of what we’ll find out in our process.”

Kauffman Stadium opened in 1973 as Royals Stadium and was part of the revolutionary Truman Sports Complex, sharing the parking lot with Arrowhead, home of the Chiefs.

Before then, the Royals debuted as an expansion franchise in 1969 and played their first four seasons at Municipal Stadium at 22nd and Brooklyn.

Sherman spoke at a press conference at Kauffman Stadium on Tuesday that was conducted via zoom and served two purposes. Moore, who became the Royals’ general manager in 2006, was introduced as the team’s president of baseball operations. Assistant GM JJ Picollo, was elevated to Moore’s position.

NEW YORK — Endy Chavez knows the occasion for the call.

Still, to hear it out loud was headshaking for the former New York Mets outfielder who made one of the greatest catches in baseball history.

NEW YORK — After looking through different areas of the team — including coaches, players and manager Aaron Boone — to see what went so wrong with the New York Yankees' 2021 season, there are still so many unanswered...Read More

NEW YORK — The New York Mets are facing a busy offseason complete with new front office hires and roster and coaching staff changes. Following another failed season, in which they underwhelmed on offense, struggled with ...Read More

ATLANTA — The image epitomized an opportunity fumbled, a chance lost, a game blown.

Chris Taylor, sitting on the dirt between second and third base, helmet in hand, head shaking, frozen in failure.

ATLANTA — The Los Angeles Dodgers were one run away from taking the Atlanta Braves’ best punch Saturday night. They withstood Braves ace Max Fried, successfully combating the left-hander with a mix of relievers, to ...Read More

ATLANTA — For the second consecutive year, the Atlanta Braves defeated the Los Angeles Dodgers in Game 1 of the National League Championship Series. This time, they’ll hope the ultimate result is different.