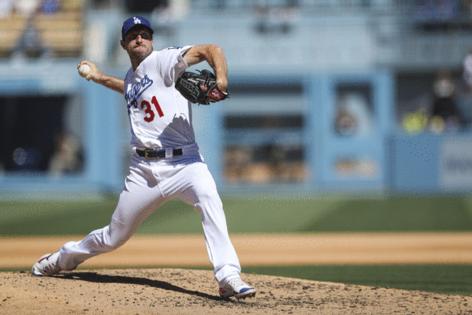 Maybe. But history seldom offers a silver lining more glistening than this: If Bauer is on the Dodgers’ roster, Max Scherzer is not.

With Scherzer here in place of Bauer, the Dodgers have a better chance to win the World Series. In his first eight starts with the Dodgers, Scherzer did something Bauer never has done in his career.

None of Bauer’s teams have won eight consecutive games in which he started.

Scherzer has started eight games for the Dodgers. The Dodgers have won every one. Scherzer’s record over those eight games: 6-0, with an 0.88 earned-run average, five walks and 72 strikeouts.

“We’ve had some good runs from starting pitchers, but I think it’s hard for me to pick any other eight-start run,” Dodgers manager Dave Roberts said. “I just can’t imagine being any better than this, especially with where we’re at in the season.”

If the season ends with the Dodgers in the wild-card game, they might face the San Diego Padres. The Padres have seen Scherzer twice in three weeks. He faced 51 batters. Five reached base. None scored.

On Sunday, he came within five outs of a perfect game against them.

“It’s just kind of amazing to watch greatness,” Mookie Betts said. “You just really appreciate the best of the best when you get to see it every day.”

Scherzer, acquired in a July 30 trade from the Washington Nationals, leads the major leagues with a 2.17 ERA. He could win his fourth Cy Young Award, a standard reached by four other greats: Roger Clemens, Randy Johnson, Steve Carlton and Greg Maddux. On Sunday, he became the 19th pitcher with 3,000 career strikeouts.

OAKLAND, Calif. — The thought of Tyler Anderson wearing the Northwest green Mariners jersey beyond this season is certainly enticing to the front office and has slowly been building a movement within the fan base.

A doubleheader in Cleveland hadn’t been this kind to the Kansas City Royals in more than a decade.

The Royals were due. After Salvador Perez’s historic homer contributed to a win in the first game of the twinbill, ...Read More

CINCINNATI — The Pirates’ pitching staff has allowed the fourth-most home runs in the National League, at 194. On Monday, they were playing in Great American Ball Park, the second-most home-run friendly ballpark in ...Read More

DETROIT — When Detroit Tigers manager AJ Hinch replaced Miguel Cabrera with Harold Castro ahead of the seventh inning, he didn't necessarily expect the utility player to take on the role of a hero in Monday's series ...Read More

PHILADELPHIA — Bryce Harper walked, bat in hand, a few steps down the first-base line when his 401-foot fly ball landed in the glove of Baltimore Orioles center fielder Cedric Mullins, whose back was pressed up against ...Read More

NEW YORK — Faced with a "save our season" type stretch to end September, the Yankees responded in a positive way.