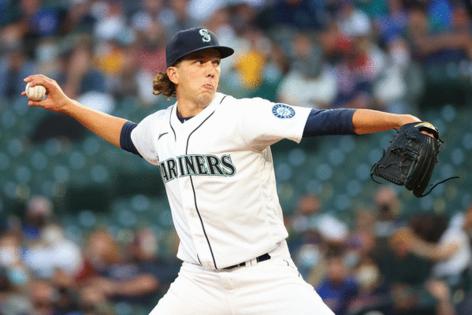 Mitch Haniger might be the most serious and intense players to ever put on a Mariners uniform since Randy Johnson was making mullets seem cool.

It’s been a source of much teasing from teammates and coaches, calling him a robot or at least part robot. But the heightened circumstances of the Mariners’ quest to reach the postseason and the emotion of the accomplishment came bursting from the stoic Haniger on Monday night.

Well, that came in the handshake line following Seattle’s much-needed 5-4 victory over the Red Sox.

Haniger’s three-run homer off reliever Ryan Brasier in the seventh inning broke a 2-2 tie and gave the Mariners a lead they wouldn’t relinquish.

The lead was quickly diminished to the smallest margin possible when Xander Bogaerts and Rafael Devers hit back-to-back solo homers off Paul Sewald in the top of the eighth to cut the lead to one run.

But Drew Steckenrider made it hold up, notching his ninth save of the season with a 1-2-3 ninth inning.

With the victory, the Mariners picked up a game in the race for the second wild-card spot, moving to two games back of Boston. The Blue Jays moved into the first wild-card spot with a win over Tampa earlier in the day.

The Mariners were fortunate that Haniger even came to the plate in the seventh. Brasier appeared to have delivered a 1-2-3 inning when pinch hitter Jake Bauers hit a groundball to first base with two outs.

However, Kyle Schwarber, who was making his fourth career start at first base – all of them coming since being traded to the Red Sox — misplayed the one-hopper for an error allowing the inning to continue. J.P. Crawford followed with a broken bat single to left field that brought Haniger, who had three singles in his first three plate appearances to the plate.

Brasier threw a 1-1 slider that stayed in the middle part of the plate and Haniger made a lunging swing on the low pitch, sending a high fly ball to left field that just kept carrying. It just cleared the wall and left-fielder Alex Verdugo’s glove by maybe a foot.

Rookie Logan Gilbert delivered an impressive outing against a Red Sox lineup that is close to being whole after dealing with a COVID-19 outbreak and contact tracing absences.

He threw 99 pitches with 64 strikes. His fastball which reached 98 mph on multiple occasions and averaged 95.6 mph. But beyond the radar guy, it was the aggressive intent that Gilbert delivered that pitch. He threw it without fear of contact. He used it to move hitters off the plate. He threw it when they knew it was coming. Gilbert threw 65 fastballs, generating 11 swings and misses, nine called strikes and 16 foul balls.

After looking like he was starting to fatigue in his first MLB season with a set of shortened and subpar starts in late July, Gilbert has seemed refreshed in his last three outings, allowing just four runs over 15 1/3 innings pitched for a 2.35 ERA with two walks and 18 strikeouts.

The Mariners gave him an early 2-0 lead, scoring a run in the first and second inning on infield groundballs.

The Red Sox answered with perhaps their least dangerous hitter doing the damage. Jose Iglesias, who was batting in the No. 9 spot, launched a solo homer to left field on a hanging slider in the third inning and then blooped a single to right in the fifth to tie the game at 2-2.