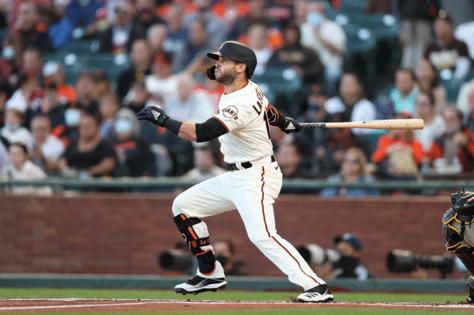 SAN FRANCISCO – This was the scene that wasn’t supposed to take place for the Giants this season. Not with two talented divisional opponents like the Los Angeles Dodgers and San Diego Padres standing in the way, and certainly not with this many days left in September.

But there was rookie reliever Kervin Castro on Monday, on the mound in the ninth inning with the announced Oracle Park crowd of 21,078 on its feet. Castro got the sign from catcher Curt Casali and struck out Ha-Seong Kim, giving the Giants a 9-1 victory over San Diego to become the first MLB team to punch a ticket to the 2021 postseason.

The Giants’ bullpen combined to take care of the rest over nine innings, starting with two scoreless from Dominic Leone, as San Francisco clinched its first postseason berth since 2016.

It’s the earliest a Giants team has ever clinched a playoff spot in the 139-year history of the franchise, as 18 games and 20 days remain in the regular season. Entering Monday, the Giants’ 93 wins through 143 games were fourth-most for any NL team since 1969.

How unlikely was that at the start of the season, especially considering this was a 29-31 team in 2020?

The Giants still have the NL West to play for, as they, for the moment, increased their lead in the division to three games with the Dodgers’ game versus the Arizona Diamondbacks still in progress.

So how were the Giants going to celebrate if they happened to win Monday? Party it up, or take it in stride? Manager Gabe Kapler, before the game, wasn’t sure.

“I want to encourage our players to be themselves, and I want to encourage our staff to be themselves,” he said. “Everybody celebrates a little bit differently. There are some who want to have every opportunity to kind of blow off some steam and celebrate and reflect. And there are others who prefer to take every step as kind of one in the process. And I respect both ways.”

No one could blame the Giants for being boisterous if they went in that direction.