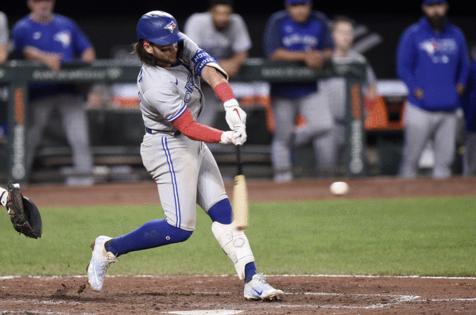 BALTIMORE — With only seven innings scheduled and six completed in breezy fashion with no hits allowed, Orioles rookie left-hander Keegan Akin was well on his way to a quick and memorable, albeit unofficial, no-hitter.

Just as quickly to begin the seventh, he lost his bid for that piece of history — and the game along with it.

With the Orioles leading 1-0 thanks to Cedric Mullins’ 29th home run of the season in the third inning, Akin allowed a single to Vladimir Guerrero Jr. on his first pitch of the seventh and a go-ahead home run to Bo Bichette four pitches later.

That reversal of fortunes set off another jaw-dropping meltdown for the Orioles, who went from needing just three outs for a no-hitter to losing 11-2 and being swept in Saturday’s doubleheader by the Toronto Blue Jays before an announced 10,219 at Camden Yards.

“Pretty disappointing way to end the ballgame” Akin said. “You don’t want to lose a ballgame like that at the end, and we kind of let that get away from us.”

In each game of the doubleheader, the Orioles (46-96) lost a lead in Toronto’s half of the final inning — 11-10 in the first game after entering the seventh with a 10-7 lead. The second game featured far less offense, at least until the end. Akin was mostly responsible for that.

He ran the count full to George Springer to lead off the game then retired the next 15 Blue Jays he faced until Randal Grichuk walked to begin the sixth.

Breyvic Valera — acquired by the Orioles from the Los Angeles Dodgers as part of the Manny Machado trade in 2018 — laid a bunt down to advance the tying run into scoring position and nearly ended Akin’s no-hitter as a result; he was ruled safe at first after Akin’s lob to Jorge Mateo pulled him briefly off the bag. Mateo, however, got back to the base a full step before Valera, and replay review confirmed as much.

Akin allowed a single to Teoscar Hernández that came around to score when Alejandro Kirk homered off Tanner Scott, leaving Akin with three runs allowed on three hits with a pair of walks and three strikeouts in six innings. Akin said he lost his command late, left pitches over the plate, and paid for it.