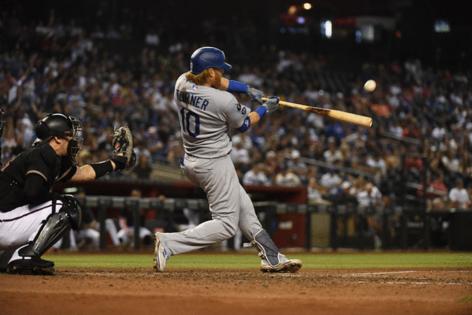 PHOENIX — Mookie Betts has had some spare time to observe the Los Angeles Dodgers’ offense, and the right fielder noticed at least one disturbing trend since he went down with a right hip injury July 19.

“We’ve put ourselves in good spots to win games,” Betts said Saturday afternoon, “but we haven’t had the big hit that leads to other hits.”

That wasn’t the case Saturday night, the Dodgers feeding off each other in an 8-3 victory over the Arizona Diamondbacks that featured four hits in a three-run second inning and five straight hits in a tiebreaking, four-run seventh.

A crowd of 23,814 at Chase Field saw the Dodgers amass 16 hits in all — 13 singles, two doubles and one home run — to stay three games behind the first-place San Francisco Giants in the National League West.

With the score tied at 3 in the seventh, Max Muncy drew a one-out walk that knocked Arizona starter Merrill Kelly out of the game. Justin Turner then turned on an up-and-in 90-mph fastball from sidearm-throwing right-hander Stefan Chrichton, sending a two-run homer into the bullpen in left field for a 5-3 lead.

The Dodgers stayed hungry. Will Smith dropped a single to shallow right field, AJ Pollock lined a single to left, and Cody Bellinger knocked a grounder off the leg of left-hander Ryan Buchter for an infield single to load the bases.

The offensive bounty provided plenty of support for spot starter Mitch White and six relievers, who combined to give up three runs and five hits.

The Dodgers’ second-inning rally began with Bellinger legging out an infield hit and Matt Beaty poking a single to right. McKinney flied to left, and White fouled off a two-strike bunt attempt for a strikeout.

Chris Taylor, who hit .333 (35 for 105) with seven homers, seven doubles, 20 RBIs and 21 runs in July, smoked an RBI single to left, and Muncy hit an RBI single to right, Taylor advancing to third on Arizona right fielder Kole Calhoun’s bobble.

Muncy and Taylor then pulled off a double steal, Muncy stopping before second base as catcher Carson Kelly’s throw sailed into center field and Taylor trotting home for a 3-0 lead.

White cruised through the first three innings, blanking Arizona on one hit, but he ran into trouble in the fourth when Asdrubal Cabrera walked with one out and Calhoun turned on an 84-mph curve that White left middle-in, lofting a two-run homer to right to cut the lead to 3-2.

Nick Ahmed led off the bottom of the fifth with a homer to left off Dodgers left-hander Garrett Cleavinger to tie the score 3-3.