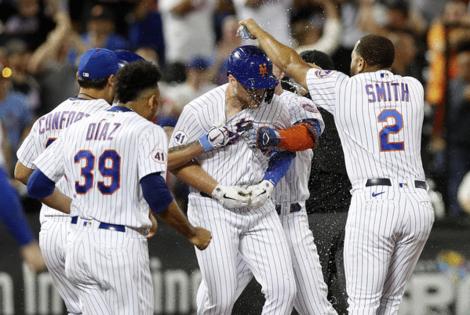 NEW YORK — Javier Baez and drama: On the way to becoming an iconic Mets duo.

Baez walked up to the plate in the sixth inning with the Mets trailing Wade Miley and the Reds by three runs. Pete Alonso was on first after a single. Jonathan Villar would have been at second, but he got picked off for the sixth time this season, the most in the majors. Villar’s pickoff killed the buzz in the stadium, as fans already expected the first out of the inning to wipe out a potential rally.

Not one to shy away from the spotlight, El Mago made sure his Mets debut would be unforgettable in their 5-4 extra-inning win over the Reds on Saturday night.

The Mets’ splashy trade-deadline acquisition parked a two-run shot to left field, his first home run as a Met. The applause from the crowd crescendoed into a frenzy as Baez trotted around the bases, seemingly indifferent to the roar surrounding him. Only when he reached the dugout and hugged his close friend Francisco Lindor, who was hyped for his shortstop replacement, did Baez allow himself to smile.

Baez let go of Lindor’s embrace and jumped up to the top step of the Mets dugout, raised his arms and took a curtain call. Fans responded with another explosion of applause and chants. Baez became the first Met this season to receive a curtain call, as he took in the New York spotlight as if he’d been playing in Queens for years.

Even though the Chicago transplant allowed the masses to escape reality for a few minutes, the realization that Baez’s two-run home run still wasn’t enough to top Cincinnati’s lead soon took center stage. After Baez’s dramatic at-bat, catcher James McCann flied out to end the inning and Reds' deficit was trimmed to one run. No other Mets batter reached base after Baez’s dinger until a gripping ninth inning that sent the game to extras.

Jeff McNeil walked to lead off the bottom of the ninth, then Reds right-hander Heath Hembree threw a wild pitch to put the tying run in scoring position. Baez and McCann both struck out chasing Hembree’s sliders, then Dominic Smith delivered the game-tying RBI single off left-hander Sean Doolittle. Onto the 10th inning, and it was Edwin Diaz’s turn to pick up the baton from an excellent performance by the Mets bullpen.

After Rich Hill was charged with four earned runs in five innings, six Mets relievers combined to pitch five scoreless innings against a potent Reds offense that has scored the second-most runs in the National League. Diaz was the last of those relievers to put on a big-time performance in a high-leverage situation. His wild pitch advanced the ghost runner to third, but he escaped with two strikeouts and a flyout to give the Mets the opportunity to walk it off.

Brandon Drury was the late-game hero with a walk-off single to center field in the 10th inning. Drury is batting 11 for 15 since the team called him up a week ago. The Mets mobbed him in the center of the diamond to celebrate their 20th come-from-behind win of the season.