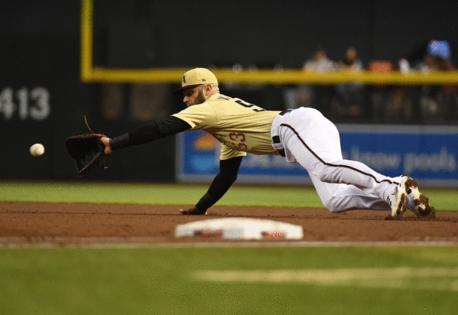 PHOENIX — Corey Seager is consistent in his evasiveness. The Los Angeles Dodgers shortstop refused to discuss his impending free agency this spring, and if he had any feelings about how Friday’s trade for All-Star shortstop Trea Turner would affect his future with the club, he wasn’t about to share them with the class.

“To be honest, it’s not something that you really think about,” Seager said before going two for five in making his long-awaited return from the injured list in the Dodgers’ 6-5, 10-inning loss to the Arizona Diamondbacks at Chase Field on Friday night.

“You’re just excited to add guys like that, whether they’re pitchers or position players. When you can add elite talent like we did, it helps you. It makes you a better team.”

The Dodgers completed a blockbuster deal to acquire pitcher Max Scherzer and Turner from Washington before Friday’s trade deadline, sending four minor leaguers to the Nationals for a pair of players who should greatly enhance their chances of winning their ninth straight National League West title and second straight World Series championship.

The 37-year-old right-hander gives the Dodgers another ace to pair with Walker Buehler while bolstering a thin rotation that lost Dustin May to season-ending elbow surgery in early May, Trevor Bauer to a domestic-violence investigation in late June and Clayton Kershaw to an elbow injury in early July.

When Kershaw, a three-time NL Cy Young winner, returns next week, the Dodgers will sport a rotation of Buehler, Scherzer, Kershaw, Julio Urías and either David Price or Tony Gonsolin, who was knocked out of Friday night’s game in a second inning in which he walked four and gave up a two-run double to Josh VanMeter.

Scherzer will make his Dodgers debut against the Houston Astros at Chavez Ravine on Wednesday night.

“Max has done it all in this game,” said Andrew Friedman, the Dodgers’ president of baseball operations. “He’s on the Mount Rushmore of pitchers in terms of what he’s done in the regular season, what he’s done in the playoffs, and adding him to our rotation creates lot of depth and options that we feel are going to be important the help navigate the rest of this season.”

He has a career .300 batting average, .890 OPS and 192 stolen bases and has been worth seven wins above replacement over the last two years according to FanGraphs, trailing only San Diego Padres shortstop Fernando Tatis Jr. among position players.

Inspiration? Never had it.

Season? About to lose it.

One night after one of the most emotional comeback playoff victories in franchise history, the Dodgers inexplicably strolled into Chavez...Read More

When he watched Gavin Lux, an infielder-turned-outfielder for all of six weeks, fail to catch ...Read More

He used to turn moments like these into memories.

Justin Turner didn’t spread his arms and fly around the bases on this Wednesday night. His first name wasn’t chanted ...Read More

LOS ANGELES – The Braves have shown their resilience time and again throughout the 2021 season. They provided another reminder of their mental fortitude Wednesday in Southern California, and they’re one win from a ...Read More

BOSTON — What a difference 24 hours can make in October baseball.

Not long ago, it felt like the Red Sox were within touching distance of a fifth World Series appearance this century. Now it seems Boston has too long a ...Read More